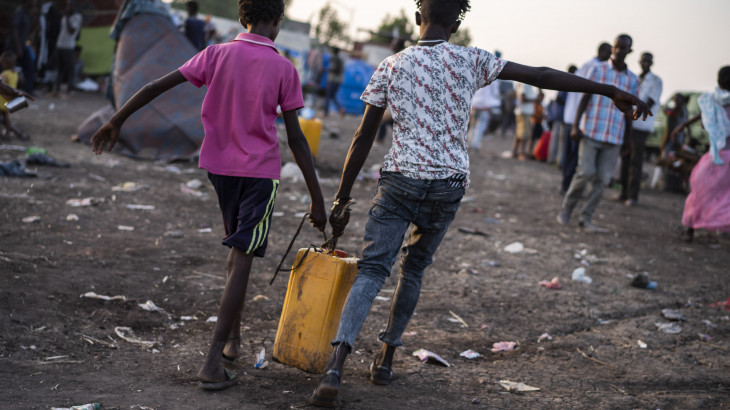 As fighting in Ethiopia's Tigray region and other areas in the north of the country forces more people to flee their homes, Ethiopian refugees in the camps in south-east Sudan face increasingly dire living conditions. Food, clean water, shelter and sanitation are desperately insufficient, and an increasing number of people suffer from malnutrition and diseases like malaria and hepatitis E. The onset of the rainy season worsened the situation and some refugees are choosing to undertake dangerous migration routes or move to other areas of the country.

"Everyone is just trying to make their life better, but youth are in a bad situation and they're turning to drugs and alcohol. They're starting to have psychological problems. There are also all the children separated from their families who are here alone," said Daniel, a 23-year-old student living in Um Rakouba camp.

Besides the harsh living conditions, thousands of refugees are unable to contact their family members with telecommunication networks in many areas of the Tigray region down. Many people suffer trauma and emotional distress, following months of not knowing if they will be reunited with their spouses and children.

Since the beginning of the Tigray crisis, the International Committee of the Red Cross (ICRC) facilitated nearly 22,200 successful phone calls between refugees and their families. However, it registered over 20,000 unsuccessful phone calls in the same period, meaning that thousands of people could not receive news from home.

"Months go by without any news from family members for far too many people," said Maria Carolina Aissa, the head of the ICRC sub-delegation in Kassala. "It is heartbreaking to see how people struggle to maintain dignity and hope in these circumstances."

About ICRC's work for refugees in Sudan:

• The ICRC supports the Sudan Red Crescent Society (SRCS) in Gedaref and Kassala to help refugees maintain contact with their families. The SRCS works in Um Rakouba and Tunaydba Ethiopian refugee camps, in Shargrab camp for Ertirean refugees, as well as in two transit sites, where the SRCS and the ICRC trained 38 host community and refugee community volunteers.

• The ICRC collected 228 tracing requests for family members inside the camps and received 20 cases from abroad through national Red Cross and Red Crescent societies. It resolved 6 cases and registered 58 unaccompanied minors. In total, approximately 60 – 70% of the total Tigrayan refugee population in eastern Sudan has benefitted from phone calls or tracing services.

• The ICRC has been supporting Doka Rural Hospital, rehabilitating infrastructure, providing medical supplies, personal protection equipment and training for the staff. It donated more than four tons of medical supplies to the hospital, that provides services to more than 40,000 members of the host community and to over 18,000 refugees in Um Rakouba camp.