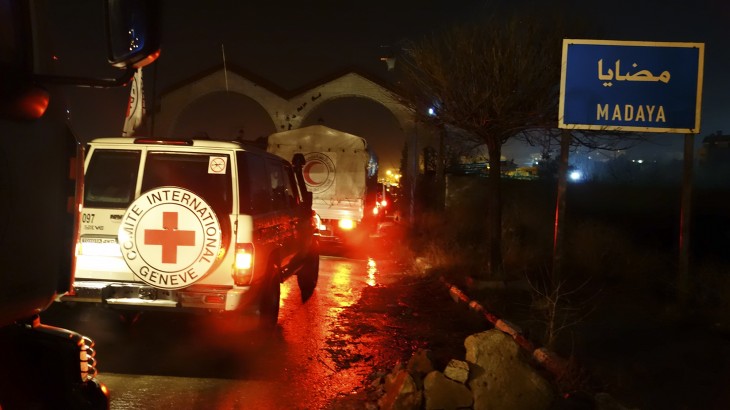 by Marianne Gasser, head of ICRC delegation in Syria

A cold rain was falling as the men carried the small bundle towards me. They were insisting I should take it.

A crowd had gathered. The only light came from the phones we carried; there had not been electricity for months.

The men stopped and slowly, carefully unwrapped the blanket. At first, I could not make out what was inside. Then it suddenly dawned on me that it was an old man.

He was wearing a jumper and black tracksuit bottoms. His little stick legs dangled in the air. His mouth lolled open. His eyes stared into nothingness.

He was hovering between life and death. The men looked at me expectantly. But there was nothing we could do.

A couple of hours earlier, we had entered the town of Madaya. An hour's drive from the Syrian capital, Damascus, the town had been under siege for months.

Tortuous negotiations had taken place to gain access to this, and other, besieged towns. Now, my organisation, the International Committee of the Red Cross (ICRC), along with the Syrian Arab Red Crescent and the UN, had been allowed to bring in much-needed aid.

But Madaya is just one of dozens, if not hundreds, of places in Syria where humanitarian assistance is desperately needed. There is a colossal level of suffering.

The war has been raging for nearly five years. 250,000 people are dead; 13 million are in need of assistance. Nearly half a million are living in besieged areas.

What is needed is a genuine and sustained effort to alleviate that suffering. At the moment, that is just not happening.

Take the relief operation in Madaya. It took literally months to negotiate.

From the start, the aid to Madaya, in the south, was linked to the delivery of aid to two towns in the north of the country, Foua and Kefraya.

Whereas Madaya is besieged by pro-Syrian government forces, Foua and Kefraya - which are suffering just as much as Madaya - are besieged by opposition groups.

One town could not be given relief without relief going to the others - and at exactly the same time. This system was so strictly followed that when one truck literally got stuck in the mud in the north, the trucks in the south could not move until it was freed.

No food could be delivered to one town until it was shown - via photos on WhatsApp - that the same food was being delivered to the other side.

Aid by synchronisation. This is not the way to run relief operations.

Back in Madaya, I was taken to what was euphemistically called the "health centre". It was, in fact, one room in the basement of a house.

Ushered into the semi-darkness, I was met by the sight of limp bodies lying on blue blankets on the floor: elderly people, weak from hunger and illness.

There were several children, hollow-faced. I noticed the needle marks on their arms where drips had been administered to try to give them the sustenance they needed to survive.

The doctor, in a bloodied white coat, took me to the one and only bed. It had two occupants.

One was a young Syrian woman on the verge of giving birth, but she had been drifting in and out of consciousness for the past four days.

The second was an eight-year-old girl, unable to speak and move. She was too weak.

There was silence. Then, next to me, the doctor started to cry.

All sides have been using what can only be termed "siege warfare", like something from the Middle Ages, where one side tries to starve the other into submission.

As ever, it is the ordinary citizen who suffers.

So as humanitarian workers, what should we do?

Yes, we can talk about how all sides should respect "international humanitarian law" - I mean respect civilians, do not attack hospitals, respect the dignity of the detainee.

Yes, we can talk about the need for "access"; allow humanitarian workers into areas to help the hungry, the ill and the wounded.

But what do we mean in practice?

Let the humanitarian workers do their jobs.

If an eight-year-old girl needs food, give it to her. If a 70-year-old man needs medical care, give it to him. Do not put lives at risk because a truck is stuck in mud, or one food parcel is not exactly the same as another.

Speed up negotiations wherever possible; this can save lives.

And let us return, again and again to these places, so that we can continue to provide assistance.

Be humane. Keep your humanity. Even under the greatest strains of war.

In Madaya, there was another moment that moved me.

A woman came up to me and, despite everything, and knowing her plight was far from over, she was smiling.

I presumed she was just happy because we had brought the aid in. I was wrong.

She lent forward and whispered to me: 'You know what you have done, you people who have come here from the outside? By talking to us, by remembering us, you brought us back something else: our dignity. Thank you."