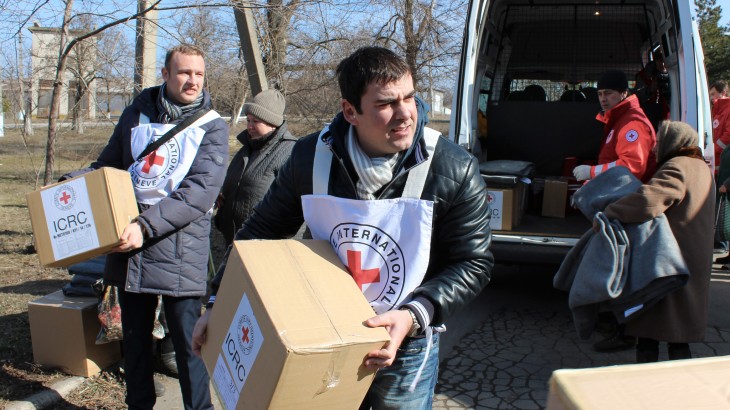 The ICRC distributed more than 2,700 tonnes of aid to people affected by the conflict in Donetsk and Lugansk regions. Over 125,000 people – residents and displaced – received hygiene items, blankets, tarpaulins and plastic sheeting. Around 120,000 people received food, including more than 3,500 hospital patients, children in orphanages and people living in homes for the elderly.

The ICRC donated medical supplies (such as dressing materials, medicines, sutures, infusions, insulin, consumables for haemodialysis and supplies for the treatment of people wounded in the hostilities) to 18 hospitals in Lugansk and Donetsk regions and 24 hospitals in opposition-held areas.

The ICRC visited people held in connection with the conflict in places of detention under the control of the Ukrainian authorities in Zaporizhia, Odessa, Poltava, Kharkiv, Artemivsk, Starobilsk and Kiev, to monitor the treatment they were receiving and the conditions in which they were being held. Fifty-five people detained in relation to the conflict were registered during 17 visits to 14 places of detention.

The organization continued to visit people at penitentiary establishments in opposition-held areas, to assess the conditions of detention in those facilities. The ICRC provided hygiene items and food to around 16,000 detainees held in 18 Penitentiary Service facilities. At the request of detainees, the ICRC passed on more than 100 family news messages to relatives, with the full knowledge of the detaining authorities.

The ICRC has been working with the Ukrainian Red Cross to document missing persons, in response to more than 300 tracing requests from family members.

Dialogue with the parties to the conflict

The ICRC is maintaining contact with all parties to the conflict on the conduct of hostilities and on incidents, such as shelling, that can reduce the capacity of health facilities to serve the civilian population.

A training course on integrating international humanitarian law (IHL) into the decision-making process was held in Zhytomyr for 21 commanders, planners and legal advisors of the Armed Forces of Ukraine. A similar course was held for 25 senior officers in Dnipropetrovsk.

Four representatives of the Ukrainian Ministries of Justice and Foreign Affairs and of the Armed Forces of Ukraine participated in the fifth Regional Conference on IHL implementation held in Minsk from 18 to 20 March. The Conference, at which participants discussed progress on the implementation of IHL in their respective States, was organized by the ICRC in cooperation with the Belarusian Ministry of Justice.

Following the ceasefire agreement that came into effect in February of this year, people have been returning to their homes. This, and the start of the farming season, led to a significant increase in the number of deaths and injuries related to mines and explosive remnants of war (ERW). The ICRC has therefore stepped up efforts to inform the population about how to stay safe, distributing 150,000 leaflets and 3,000 posters on safe behaviour in conflict-affected areas. At the same time, the ICRC trained Ukrainian Red Cross volunteers to educate others about the risks of mines ERW.

Cooperation with the Ukrainian Red Cross

The ICRC worked closely with the Ukrainian Red Cross to distribute aid for displaced people and residents affected by the conflict in Donetsk and Lugansk regions, and provided financial support and know-how for its tracing, communication and emergency response services.

The ICRC is providing Red Cross branches in Crimea and Sevastopol with aid for distribution to people who have fled violence in eastern Ukraine. Some 13,200 people received food and basic items in February and March. Since June 2014, more than 50,000 people have benefited from such assistance.

Cooperation with the Belarus Red Cross

Cooperation with the Russian Red Cross

In March 2015, the ICRC began a second aid-distribution operation for Ukrainians in Rostov region, Krasnodar Krai and Adygea. Around 23,500 people will receive food parcels and hygiene kits every month. The Russian Red Cross has assisted some 175,000 people since June 2014.

The ICRC supported the work of a temporary accommodation centre and hotline for displaced persons from Ukraine, operated by the RRC's Saint Petersburg Branch.