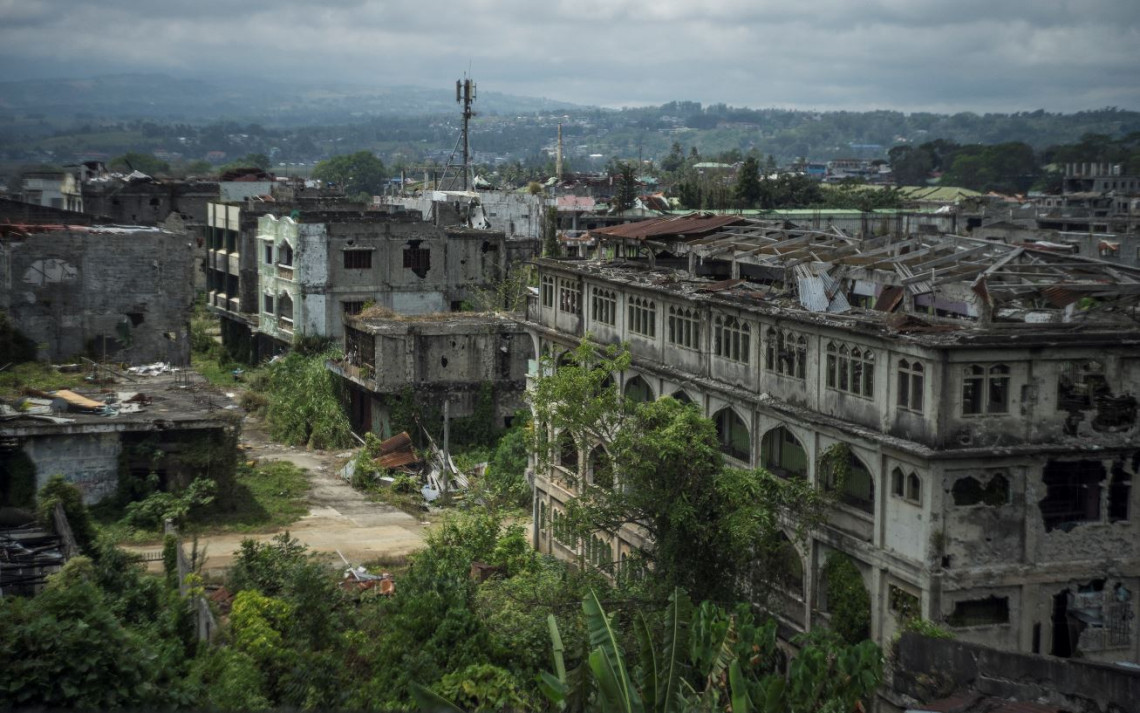 When wars are fought in cities, it is civilians who bear the brunt. In this series, we explore the devastating impact on people who have seen their streets become the frontline.
Article 17 February 2022 Philippines United Kingdom Ireland

The ICRC recently issued a report highlighting the deadly choice people face after explosive weapons are used in cities and towns as part of war: either abandon their homes and their lives forever or return to broken neighbourhoods, to live with no basic infrastructure, in streets often littered with unexploded devices.

In Marawi, a city in the southern Philippines, around 100,000 civilians displaced by the five-month conflict in 2017 are still unable to return because of the extent of the damage. Many remain in temporary shelters or live with relatives elsewhere, whilst those who have returned are living in a city that bears no resemblance to the one they left behind.

During the fighting, explosive weapons 'with wide-area effects' were used. These are weapons that are designed to have a wide blast area, so that they are more likely to hit the desired target – but when they're used in a city like Marawi, they can take down everything around them too.

Many people had no homes to go back to. Access to drinking water, let alone supplies to shower, cook and wash with, was scarce. There was no electricity. Many businesses were shut, many jobs simply no longer existed.

You couldn't even get around parts of the city because some of the roads and streets were severely damaged. 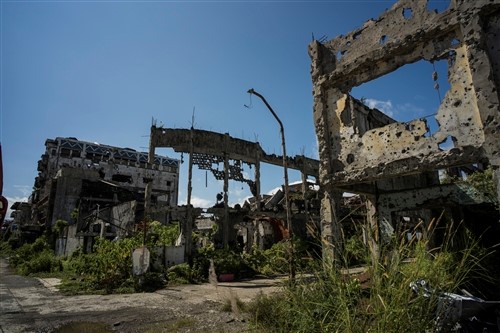 The ICRC UK & Ireland team spoke to Leo Quiniquiz, an ICRC technician who has been supporting our humanitarian response in Marawi since 2019. 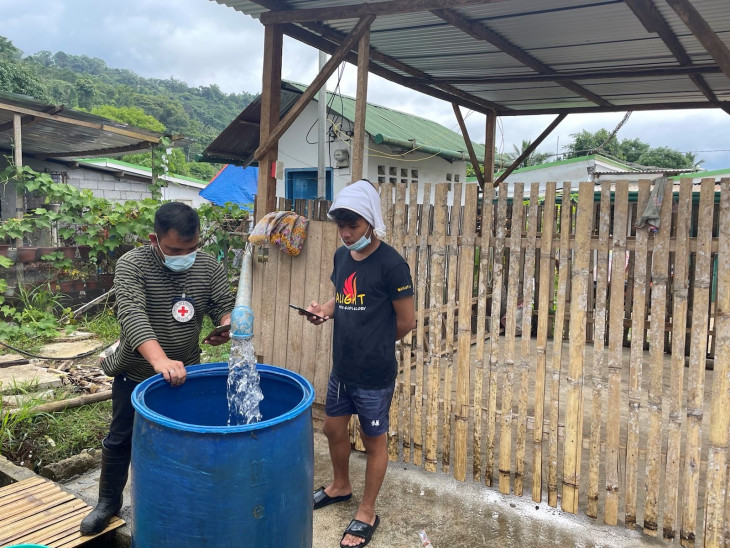 My name is Leo and I'm a technician working in the water and habitat team. We help make sure that people affected by conflict have access to clean water and sanitation and we work to improve the places they live in, to reduce suffering.

How did the ICRC help the displaced in terms of water and shelter?

Working hand-in-hand with the Philippine Red Cross, we knew there were two key challenges from a water and habitat perspective: Thousands of displaced people were living in transitory sites on the outskirts of the city and needed both access to potable water and basic shelter. 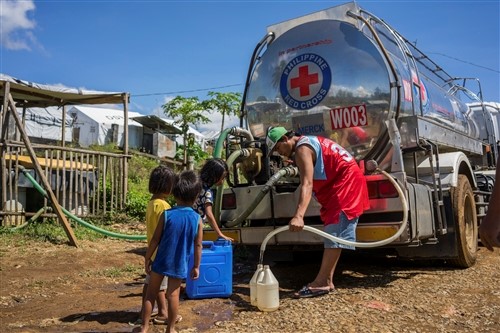 In cooperation with the Philippine Red Cross, the ICRC provides water for evacuees in a temporary settlement camp. ICRC/Martin San Diego

For water, the Philippine Red Cross brought in a water truck with daily supplies for the displaced communities across two sites, whilst we supported them through providing maintenance and fuel for the trucks and by setting up a water tank for the community.

We also improved a shallow borehole and identified displaced people who had the skills needed to manage the operation and maintenance of that water source for the community going forward.

That's always our goal: working so that communities are given the tools to help themselves, helping to build that capacity, and then handing the project over to the community for sustainability.

How much water do people use each day?

In the UK, each person uses on average about 142 litres, but in conflict-affected countries, families are often reduced to using a tenth of that: a mere 15 litres a day per person, often having to manage all their household needs with a couple of jerrycans' worth of water. 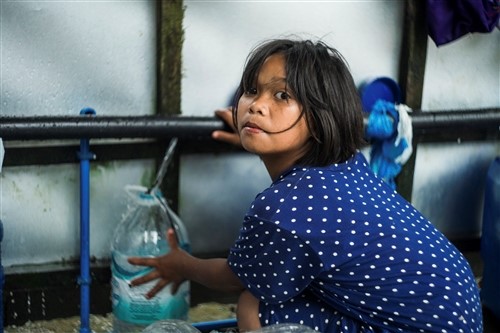 A young girl gets water in Marawi - ICRC/Vee Salazar

We also worked to improve housing conditions in a transitory site. One of the main issues was that the roofs had stopped being waterproof so that when it rained, families and all their belongings were getting soaked through.

Instead of hiring a third party to fix the housing stock, we thought this was a good opportunity once again to enable the community to help themselves, so we identified people who could do the work, where possible from each household. We provided them with the tools, training and technical support to do the roof repairs and paid them for their labour.

Again, our focus is to give communities the ability to take some action themselves to help their families. 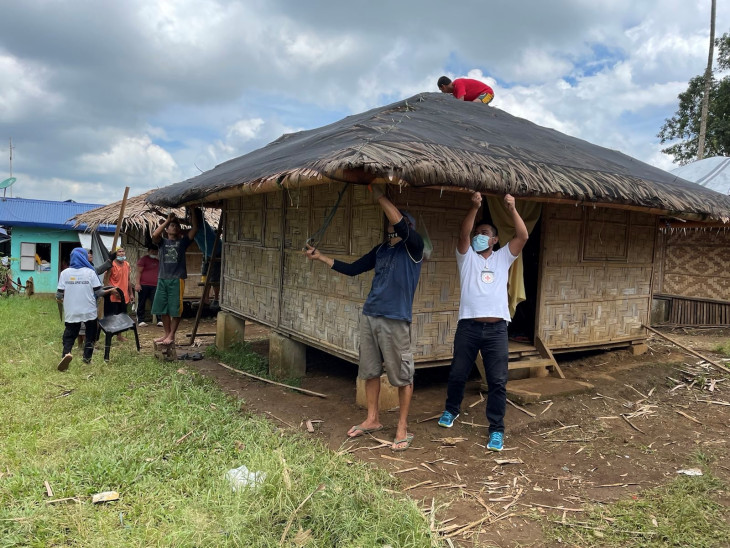 Leo (right) assisting an internally displaced family from Marawi to install a net over the newly replaced nipa (palm) roof. The net is used to prevent decay.

What about in Marawi city?

Our main focus in Marawi has been to get the water infrastructure up and running again.

As a first step, we worked with Marawi City Water District and identified what we could help them with, donated some materials and fixed what we could. After patching up all the biggest leaks, we were able to restore around 50% of the original capacity, whilst providing some essential things it needs to run, like fuel and chlorine. We also renovated the main building which was partly damaged by the siege.

We worked with Marawi City Water District and other partners on the restoration of the water supply in Marawi. We are rehabilitating all of the existing water-pumping stations and replacing old pipelines in some parts of the city.

This means that in the areas that were devastated by the conflict, there's still no running water at all. Though in less-affected areas, at least there is water in the houses. The Government is also carrying out a lot of water trucking to increase capacity.

There's still a long road ahead, but it's a start and hopefully over time access will continue to improve so that people can start coming back and rebuilding their lives, their homes and their city.

Join our community to reduce the human cost
of urban warfare 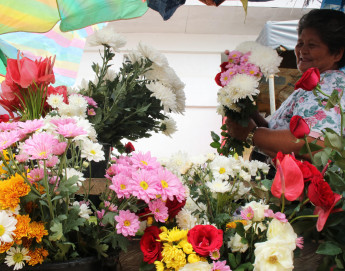 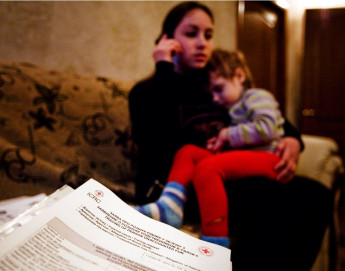 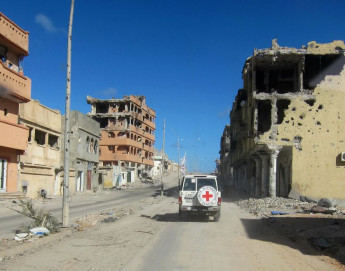