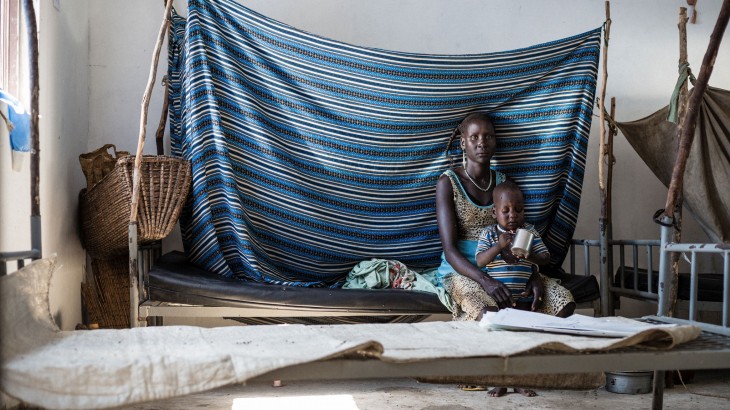 Decades of violence in South Sudan have shattered hopes for a sound medical system. For a patient who needs to reach a hospital in an emergency the absence of roads is a death sentence. CC BY-NC-ND / ICRC / Alyona Synenko

The 17-year-old would have been the mother of twins. Nyandieng's first child was delivered at the family's simple mud and straw home. But complications prevented the second twin's birth. Seeking help, the family carried the still-pregnant teenager to the nearest clinic - a torturous five-hour walk away.

Edward Dramwi, a nurse with the International Committee of the Red Cross, helped deliver the second child that night at a simple clinic in the town of Waat. But the child was stillborn. In addition to the trauma of losing a baby, Nyandieng also lost a lot of blood. She needed a transfusion, a procedure that was beyond the capacity of this clinic.

The next morning the first thing Edward did was check in on Nyandieng. She looked frail, weak and exhausted. Family members wiped her brow and tried to keep flies away from her face.

"We can't do anything else for her here. She must go to hospital," Edward said. During the dry season a car would have taken the young woman. Now, though, the seasonal rains would prevent that. "The road is completely flooded. The car won't make it there," he told the family.

Decades of violence in South Sudan have shattered hopes for a sound medical system. For a patient who needs to reach a hospital in an emergency the absence of roads is a death sentence.

To reach the hospital the family would have to walk through swamps for nine hours. They decided against it. Two hours later Nyandieng died, and the family took the mother and stillborn child home, where the first-born twin must fight to survive without its mother.

"It is so painful to watch your patients die just because there is no road and you can't send them to hospital," Edward said, profound distress showing on his usually bright and smiling face. "A few weeks ago, a pregnant woman arrived at night. Her uterus ruptured. The only thing we could do was try to console her. She cried all night and died in the morning."

Preventative measure can improve a mother's chances for a safe delivery, but a lack of awareness and difficult access mean a limited number of women reach assistance. The clinic works with traditional birth attendants who try to persuade women to come to the clinic at the early stages of pregnancy for prenatal checkups.

"We try to identify high-risk pregnancies early and tell the women to go to hospital before the labor starts," explains Nyawech Sammuel, a midwife assistant at the Waat clinic.

But even this approach has its limits. Advanced medical devices like ultra-sound machines are extremely rare. Health workers' abilities to detect abnormalities are limited. "At least every three months there is a maternal death. This is the minimum. Often there are more" said Patricia Maina, an ICRC health delegate. 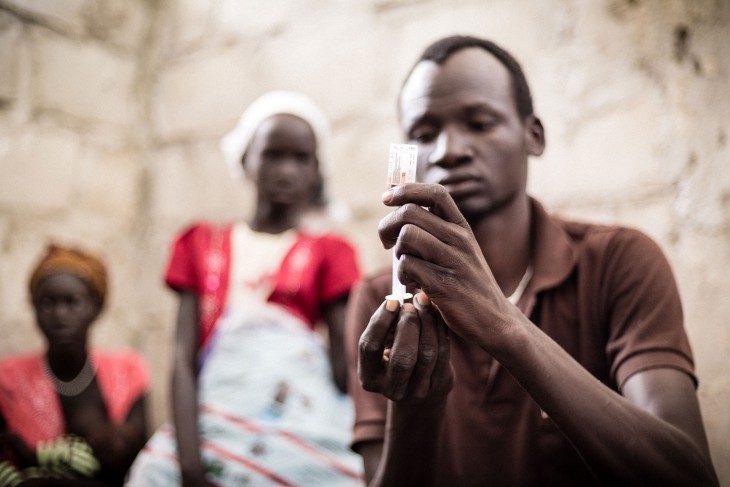 Even after the guns fall silent, the effects of decades of conflict in South Sudan can be felt by thousands of people who have no access to proper healthcare. CC BY-NC-ND / ICRC / Alyona Synenko

The ICRC is supporting the Waat clinic to ensure that people affected by conflict have access to basic healthcare services. Some other health facilities in the region closed down because of a lack of money, increasing the pressure on Waat.

"This structure was originally supposed to provide services to some 45,000 people, but it is currently serving between 60,000 and 70,000 people with only two clinic officers to attend to them. Many patients come to us from far away," said Patricia.

All the medical supplies in Waat are delivered by airplane or helicopter, and sometimes supplies run low. When fighting broke out in Juba in July, the Waat clinic went weeks without a re-supply, Edward said. "During that time a woman brought a child with a mild pneumonia. Our stock was completely out of antibiotics. A few days later the pneumonia became severe and the child died."

Finding skilled workers is another challenge. "I can't even take holidays because there's nobody to replace me," said Nyawech. Most of the healthcare workers never receive any formal training, and instead learn on the job. Many lives depend on their skill and dedication alone. "When a woman is bleeding I have to use the right technique to arrest the blood. If I fail, the woman will die," says Nyawech.

Tens of thousands of people have died in fighting since late 2013, though no one knows an exact number. What is certain is that this unknown number rises every day, even when the guns are silent.

"These people are the war victims," Edward said, sweeping his arm toward the patients in the simple medical clinic. "But they die unnoticed."