War on words: Is journalism disappearing from conflict zones? 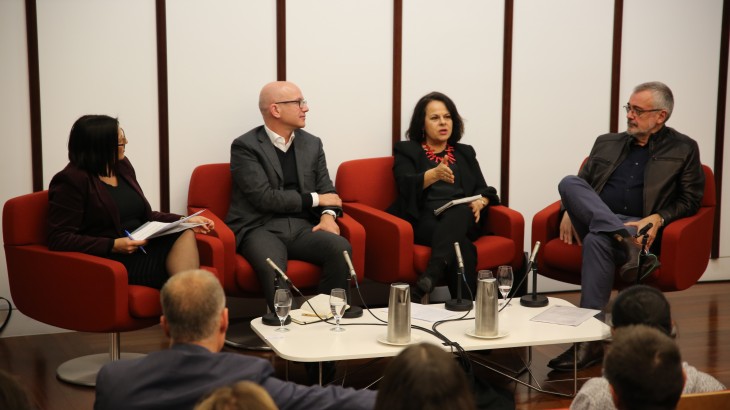 Journalists are instrumental in raising awareness of wars and play a critical role in influencing the international community's humanitarian response to populations affected by crises. However, the media's role in conflict reporting is increasingly under threat. Ongoing, strategic attacks against journalists have reduced the number of media correspondents either willing, or able, to operate in war zones, leaving others – such as social media-savvy activists, fighters and governments – to fill the information void. As journalists disappear from war zones, how does this impact the news we receive about conflicts?

These were the issues under the spotlight at a recent panel event, War on words: Is journalism disappearing from conflict zones?, hosted by the International Committee of the Red Cross and Australian Red Cross in Canberra. ICRC director-general Yves Daccord was joined on the panel by two of Australia's most recognised foreign correspondents, Helen Vatsikopoulos, journalist and academic at the University of Technology Sydney, and Peter Cave, retired war correspondent and foreign editor of the Australian Broadcasting Corporation. Dr Caroline Fisher, Assistant Professor in Journalism at the University of Canberra moderated the panel.

Don't shoot the messenger
The discussion kicked off by looking at one of the key reasons journalists are disappearing from combat zones: the increasingly dangerous working environment. While international humanitarian law (IHL), also known as the rules of war, is intended to protect civilian journalists on assignment from any form of intentional attack, these rules are often not respected. According to the Committee to Protect Journalists at least 26 journalists were killed in combat or crossfire last year.

Mr Cave said the recent wars in Syria and Iraq had marked a major change in terms of safety for foreign correspondents, with some governments and armed groups now viewing journalists as targets, rather than messengers. He said, with war journalism becoming more and more dangerous, experienced international correspondents are "less keen to risk their lives to do it".

The panelists agreed that the role of journalists had been undermined by the increasing use of social media channels in conflict situations, which had allowed warring parties to bypass traditional media in their efforts to broadcast information. "If you are a warrior, if you want to control information, if you want to do propaganda, if you want to pass a message, there's now no need for media," Mr Daccord said. "I think that's one of the critical elements."

Who's filling the void?
As fewer journalists make the journey to war zones, there are others, including citizen journalists, local activists and bloggers, who are ready to take on the role the international media has largely vacated. The panelists acknowledged the work done by these individuals, but warned against uncritically accepting the information they provide. "Who is this blogger, and what is their agenda?" asked Ms Vatsikopoulos. "Can they be trusted? Who is this citizen journalist that everybody talks about? And how do we verify what they say? Are they acting ethically? Do they have journalistic standards that we have gained through our experience and also our training?"

"I look upon the so-called citizen journalist as I look upon an eyewitness after a bomb went off," Mr Cave said. "A lot of people run up and everyone will tell you a different story about what happened. There is a vast amount of information coming in. Some of it's accurate. Some of it is mistaken. Some of it is blatant propaganda."

While it was traditionally the role of journalists to sort through this information and present a balanced picture of events, more and more audiences are getting their news from social media feeds, which is often one-sided, and direct from the source.

Mr Daccord observed that while certain flashpoints in conflicts – such as the final moments of the recent battles for Aleppo or Mosul – still make the headlines of mainstream news programs, it is becoming more difficult for audiences to find a news platform that delivers ongoing, in-depth coverage of the different wars unfolding around the world.

"At the end of last year, everybody was somewhat was interested in Aleppo... there was a lot of 'noise' about Aleppo," he said. "But it was very difficult to understand what was happening; hard to understand the complexity. A lot of people were talking about it, but having somebody, a trusted figure, who could explain to me over weeks or months what was happening, that was missing dramatically."

He said this had led to a situation where mainstream audiences in countries such as Australia feel disconnected from what's happening in wars, even those in which their own defence force is fighting.

Changing perceptions
The panel wrapped up by asking the question: is the changing nature of war reporting impacting how people perceive conflicts?

A recent study by the ICRC, which surveyed 17,000 people in conflict and non-conflict-affected nations, revealed current global attitudes to war and IHL – and the results were both comforting and concerning.

While there was near universal acknowledgement that hospitals and health-care workers should be protected in conflict situations, there was at the same time a rising acceptance of civilian deaths as an inevitable part of war, notably among respondents in countries that are permanent members of the United Nations Security Council - such as the United States, France and China.

Ms Vatsikopoulos suggested that the increasing prevalence of fast-paced, shorter-format news for smartphones was resulting in fewer opportunities for audiences to significantly engage in issues relating to conflicts, leading to reduced understanding of what's acceptable or not in times of war, and reduced empathy for victims of armed conflict.

"If you write something that's much more in-depth, you have a greater chance of getting people to engage with the story. Psychologists call it the 'Transportation Theory': you're reading that story, you're thinking 'that could be me, that could be my children', I am engaged, I feel and I empathize."

The ICRC runs a dedicated hotline for reporters on dangerous assignments, enabling journalists, their families and the media organizations they work for to request assistance if they are wounded, detained or missing. For more information click here.