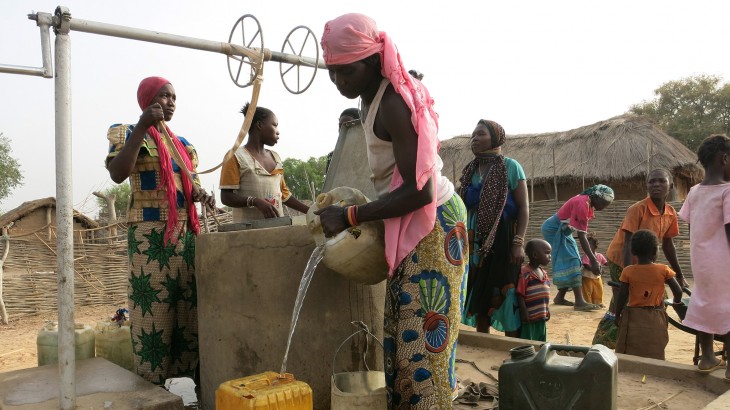 Women and children of the town of Birao fetching water from a well rehabilitated by the ICRC. CC BY-NC-ND/ICRC/Thierry Mugisho

The town of Birao, with 10,000 residents, is suffering from its remote location in the north of the Central African Republic and receives little aid. In addition to experiencing long gaps in the provision of public services, residents face an influx of people displaced by the conflict.

Birao, over a thousand kilometres from Bangui, is hard to reach by road and almost completely cut off during the rainy season. "It's a real challenge for those few aid organizations that attempt to reach these people," said Marius Cocoa, an official of the International Committee of the Red Cross (ICRC) based in the region. "Although they have not been directly affected by the fighting, those living here are suffering from a shortage of health services, drinking water and food. The structural and socio-economic problems that existed before the crisis have only gotten worse."

Medical staff and supplies are in great demand despite the efforts of several humanitarian organizations active in the town, where malaria and diarrhoeal diseases affect children in particular. "Medical workers who used to be based in Birao preferred to go back to Bangui," said Mr Cocoa. "And the one health-care centre that remains experiences regular disruptions in its supply of medicines owing to logistical difficulties." Agricultural production is hampered by the low level of rainfall in the region and does not meet the food needs of the local population, who must also deal with the arrival of more than 700 people displaced by violence in other parts of the country. Access to drinking water is another major concern in Birao. Most water pumps are broken, leading some people to drink dirty or even contaminated water.

In 2012, the ICRC began several projects in Birao that should help alleviate these problems. The organization promotes food self-sufficiency through farming support, including the introduction of a variety of cassava resistant to mosaic, a disease that significantly reduces the crop yield. The ICRC also oversees a health-care programme aimed at battling malaria in which it provides free care to the sick; in March, some 390 patients were seen and more than 340 were treated. Finally, repairs to wells and water pumps have been made in order to reduce the spread of water-related diseases. "The needs of the community are enormous and require a greater level of support from the international community over the long term," said Mr Cocoa.

Elsewhere in the country, between 1 and 31 March 2015, the ICRC working in cooperation with the Central African Red Cross Society: