Democratic Republic of the Congo: From despair to resilience, Honorine has rebuilt her life

Donate now
Five years ago, Honorine was raped. Now, in Sange, South Kivu Province, in the Democratic Republic of the Congo, she has her hands full with work at a hospital, her restaurant and her grocery store. Her businesses’ success, sparked by financial support from the International Committee of the Red Cross (ICRC), has set an example for other survivors of sexual violence.
Article 15 March 2021 Democratic Republic of the Congo

Home after a long day of work, Honorine* is finishing the last of the housework before going to bed. The mother of three says, "I wake up every morning at 5am and do everything to get to bed at a decent hour." Between home, the hospital and her two businesses, Honorine's days are plenty full.

"My schedule at the hospital changes each week between night and day shifts," she says. "If I work mornings, I can leave around 4pm for either the grocery store or the restaurant to pitch in. Altogether, I have six employees."

And when she is free during the day, Honorine doesn't hesitate to get cooking. Her restaurant is packed with customers from the early hours of the morning and has been invaluable in achieving her dreams. "It's thanks to this business I could pay for my nursing studies," she says.

With business booming, Honorine is now well known in her neighbourhood, and those around her appreciate how she has contributed to the economic development of Sange, a city of more than 50,000. But she has not always been the forceful woman she is now, respected for her professional achievements.

Into the inferno – and back

Sange, like other places in Ruzizi Plain, South Kivu, is known for its crime rate. The surrounding mountains are home to local and foreign armed groups, and sexual violence and kidnapping for ransom are standard fare. One day in 2016, Honorine was collecting firewood just outside of town. "Two armed men came out of nowhere and raped me," she says.

The physical, psychological and social fallout deeply affected Honorine. She was stigmatized because of the rape. She no longer had the strength to fight. Her earnings dwindled. "I had lost my zest for life," she says. "But that's all behind me now."

Shortly after the attack, Honorine had the good fortune to meet members of SOPADI, a local organization supported by the ICRC that helps victims of sexual violence. She says, "The women welcomed me in and listened to me. And then they directed me to a hospital. Without them, I wouldn't have done as well as I have."

After she got medical care, Honorine received financial help from the ICRC as part of an economic-support programme for survivors of sexual violence. She started her first business and got a loan after opening an account with a local microfinance institution.

"I was able to do business, and with the profits I paid back the loan, which allowed me to get other loans," she says. "My life now, and everything I have, is thanks to the women at SOPADI and the ICRC's financial support."

A psychosocial worker (left) speaks with a survivor of sexual violence at the counselling centre in Sange. The ICRC supports around 40 counselling centres in North and South Kivu, where survivors can go for care and support. Albert Nzobe / ICRC

A model of strength and courage

Sarah Khenati, who heads the ICRC's programme to combat sexual violence in the Democratic Republic of the Congo, says of Honorine's story, "The stigmatization that sexual violence victims face adds to the trauma they've already experienced. Women like Honorine bear a double burden.

Our role at the ICRC is not only to bring survivors medical and psychosocial help but to support them in reintegrating into society, socially and financially. Ultimately, it's about giving them back their confidence, a place in society and their dignity."

Rukiya Sadiki, one of the psychosocial workers who met Honorine through SOPADI, remembers her: "She summoned up the strength and courage to get on with her life. She's a role model for women who have lost all hope, who feel shame and isolate themselves. Her story shows it doesn't have to be like that."

To Honorine, hope for a better future should never fade. "Women have to fight to earn a living," she says, her voice resolute. "Even by selling just one container of oil, you can make your way through."

In 2020, the ICRC brought medical and psychosocial help to 3,710 victims of sexual violence in the Democratic Republic of the Congo.

*Name has been fictionalized

DRCongo: Sexually assaulted as a teen, Thérèse gets her confidence and dignity back 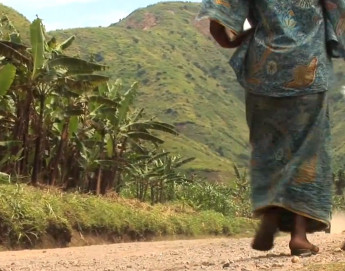 Democratic Republic of the Congo: The survivors

Combating sexual violence in the Democratic Republic of Congo