Counter-terrorism and IHL: Challenges to caring for wounded and sick on battlefield

Speech delivered by Chris Harland, ICRC legal adviser, on the occasion of the launch of the Study of the United Nations Counter-Terrorism Committee Executive Directorate on the interrelationship between counter-terrorism frameworks and IHL

Thank you very much Krisztina and thank you to both CTED more broadly and to the government of Switzerland for the invitation to say a few words at the launch of CTED's Study on the interrelationship between counter-terrorism frameworks and IHL.

This year marks 160 years since the person at the origin of the ICRC, Henry Dunant, published a book entitled A Memory of Solferino, which detailed his June 1859 experience in the aftermath of a short but very deadly battle in Northern Italy. In the book, Henry Dunant asked two questions. The first was whether it would be possible to create relief societies that would care for the wounded in wartime. This lead to the creation of the ICRC and to the Red Cross and Red Crescent Movement. The second question was whether a Convention could be drafted to allow for that relief to take place in times of war, leading two years later to adoption of the First Geneva Convention of 1864, the genesis of modern international humanitarian law.

Terrorism negates the principle of humanity. The ICRC condemns acts of terrorism, which are prohibited by IHL.

CTED's study, launched here today, gets at the heart of Henry Dunant's two questions. Allow me to highlight three elements emanating from the Study.

First, we echo the many challenges identified in carrying out humanitarian operations that result from CT measures, including those gathered by OCHA, whom we thank for their efforts. Such measures can have a negative impact on people and communities affected by conflict. The objective of humanitarian organizations is to alleviate the suffering of people caught up in conflict.

For humanitarian organizations, such measures can include (1) donor restrictions on any form of indirect economic contact with persons deemed terrorist, including those controlling territory where civilians are present, (2) bank de-risking, and (3) criminal charges against staff for carrying out their IHL-mandated work for contact with persons and groups identified as terrorist. These measures flow, inter alia, from the national implementation of Security Council counter-terrorism related decisions.

Such challenges can prevent the establishment of clean water for civilian communities, ICRC visits to detention facilities, Covid-19 vaccine distribution and treatment, and care for the wounded and sick in armed conflict, elements regulated by IHL.

Second, what can be done by States? For members of the Security Council, we ask that CT-related measures include an express reference to complying with IHL when taking CT measures, as was done in Resolution 2462. Further, asking States to take steps to mitigate negative humanitarian impact by CT measures would be welcome. A humanitarian carve-out was recently adopted in Resolution 2615 for Afghanistan, in a resolution whose preamble highlights counter-terrorism measures. This is similar to annual Council resolutions on Somalia, where a humanitarian carve-out also exists. Clauses noting that implementation measures are not intended to have adverse humanitarian consequences for civilian populations were introduced in numerous sanctions regimes last year, and could be considered for future CT resolutions.

For all other states, we ask that they bear in mind IHL obligations when drafting counter-terrorism legislation, and where impartial humanitarian actors are operational. In recent years, a number of states have adopted humanitarian exemption clauses in CT legislation. These humanitarian carve-outs in criminal CT-related legislation could be studied for adoption by other countries. However, we do not recommend the use of "derogations" requiring frequent approval to carry out humanitarian operations in armed conflict by parties other than the belligerents. Fionnuala described them as unworkable and incompatible with IHL in her October 2020 Annual Report.

We further agree with the utility of convening of regular "stakeholder dialogues" in countries in order to facilitate dialogue between humanitarian organizations, financial and other relevant government bodies, and the private sector, including the banking industry.

In terms of accountability for violations of IHL, direct attacks against civilians, including when these are characterized as terrorist acts, are prohibited by IHL. The ICRC's Advisory Service on IHL works to ensure that serious violations of IHL can be punished as crimes in domestic legal systems. We encourage accession to IHL treaties, creation of National IHL Committees, and national implementation of IHL obligations.

Third, what can be done by CTED? CTED plays an important role in working with States on the measures by them to implement Security-Council mandated action in the counter-terrorism sphere. CTED country assessments are critical in this respect.

We note that CTED's Framework Document of July 2020, has included questions on IHL compliance more generally, as well as asking how States have taken into account, in accordance with OP 24 of Resolution 2462, the impact of CT measures on impartial humanitarian and medical activities. The need to gather further information was highlighted by CTED's joint report with the 1267 Monitoring Team in June 2020, which saw little input on what states had done to "take into account" such impact to date.

We further note CTED's expressed commitment to explore ways to expand its dialogue regarding measures that can be taken to ensure compliance with IHL when undertaking CT measures.

It is of course quite possible to do both. First, to prohibit "Acts or threats of violence the primary purpose of which is to spread terror among the civilian population" as required by the Additional Protocols to the Geneva Conventions on the one hand. And second, to allow and facilitate rapid and unimpeded relief in armed conflict, as provided for in Article 70 of Additional Protocol I on the other. Note that this obligation applies to all States Parties, not only parties to a given armed conflict.

Fundamentally, it must be possible to care for the wounded and sick on the battlefield without running afoul of counter-terrorism measures. It must be possible for impartial humanitarian organizations to assist and protect civilians in armed conflict without violating Security Council obligations.

Thank you very much Krisztina and congratulations to you on all your hard work culminating in this important Study. 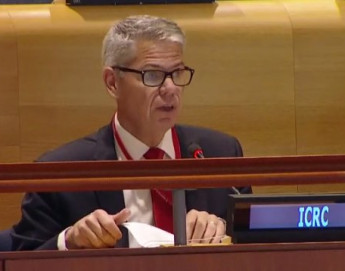 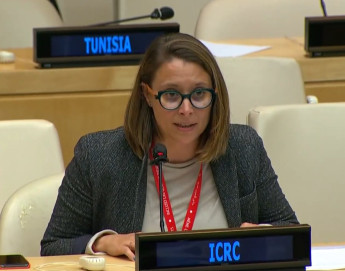