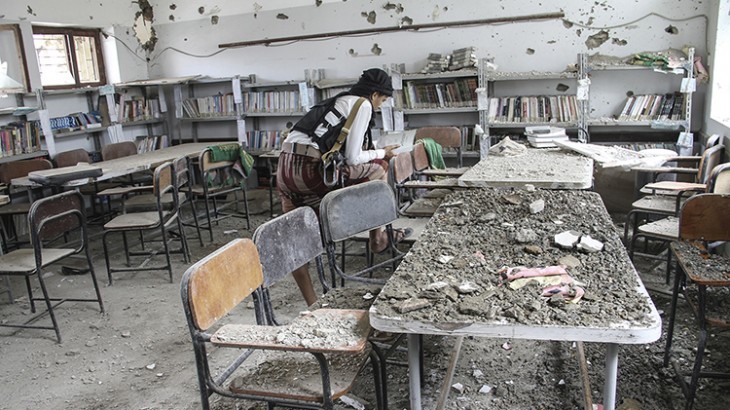 As part of ICRC's conference cycle on War in cities, Russian and foreign experts gathered on 6 March 2017 in the Humanitarium Center of the ICRC's Regional Delegation in Moscow, to discuss whether the existing norms of international humanitarian law (IHL) provide adequate protection for the victims of modern conflicts, and whether these standards will suffice for conflict situations of the near future.

Those specialists represented the Geneva Center for Security Policy (GCSP), the University of Tel Aviv, the Military University of the Ministry of Defence of the Russian Federation, the St-Petersburg State University and the ICRC. 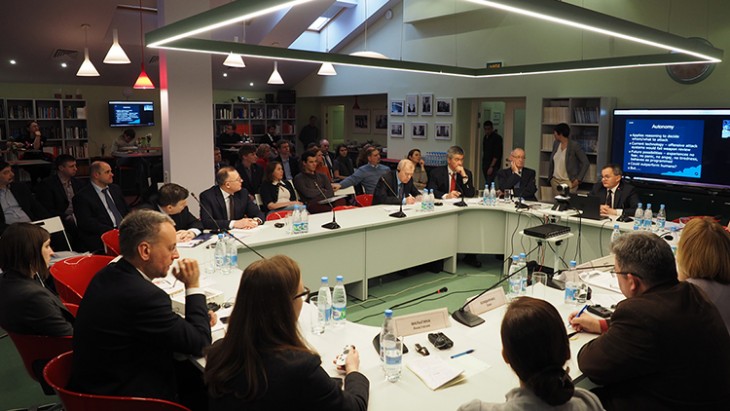 New technologies keep on being introduced in the modern battlefield. Is the law of armed conflict still fit for purpose? We (obviously) think so.

Just like technological progress, means and methods of warfare are evolving. Today, the overwhelming majority of armed conflicts take place in cities. Unmanned aerial vehicles from the realm of science-fiction are being incepted into reality. The threat to personal, corporate and State information is giving impetus to the development of a new field – data protection. Genetics are working to improve the human body or even create one from scratch. Military developments could make objects and people invisible in a near future. Perhaps one day humans will even witness combat between programmed machines.

Nowadays, like 150 years ago, the humanitarian sector is forced to adapt and take into account the realities of modern armed conflicts. These can be new unmanned vehicles armed with invisible lasers or technologically-enhanced soldiers, all of which using new approaches to attacking cities. How can the principle of humanity – understood, among the International Red Cross Red Crescent Movement, as an endeavour to prevent and alleviate human suffering wherever it may be found – straddle this pursuit of military advantage?

"Do we not, with all these technologies, go beyond the boundaries of what we consider permissible? Are these boundaries reflected in the existing law or are we in a situation where today's law is too far behind, and we need to start thinking about creating new norms? And if we talk about this, how will we create these norms? Are we sure that we have mechanisms that will allow us to do this?"

Military actions in the urban environment impact the way humanitarian organizations conduct their work and urge special care towards the observance of IHL. As Vincent Bernard, editor-in-chief of the International Review of the Red Cross and head of the ICRC's Law & Policy Forum, said:

"Such an environment as the city requires long-term involvement from the humanitarian sector and changes in approaches to work. Restoring destroyed cities and urban infrastructures is a difficult and expensive task. The degree of suffering of the civilian population, as well as the cost of the reconstruction process, will be much lower if the law of armed conflicts is respected. We, those who work in the field, know this from our own experience."

"If you can take out a civilian - take him out. Of course, sometimes there are situations when the city is surrounded and people cannot be evacuated. In such cases, if evacuation has not been carried out, very often city residents become 'human shields' and are victims of what is called 'collateral damage'. So, if you stayed in the city, your chances of being injured or killed are very high."

Representatives of the Military University of the Ministry of Defense of the Russian Federation believe that compliance with IHL during urban battles may contradict the tasks assigned to the military by their leadership, and also lead to additional losses among personnel during the performance of such orders.

New means or method of warfare are not beyond the law. Even in the absence of a specific prohibition applying to a new military technology, the obligation to comply with the law of armed conflict remains. This obligation is associated with the application of the principle of distinction and proportionality, among others.

When or if war comes to be fought with robots, invisible planes and "supersoldiers", IHL will stay in place and will remain binding on States and military forces alike. Its purpose will endure: to protect those who are not or no longer taking part in hostilities, so as to provide a safeguard to humanity during warfare.

Read more about the event in Russian here.