The ICRC in Kosovo: January to December 2017 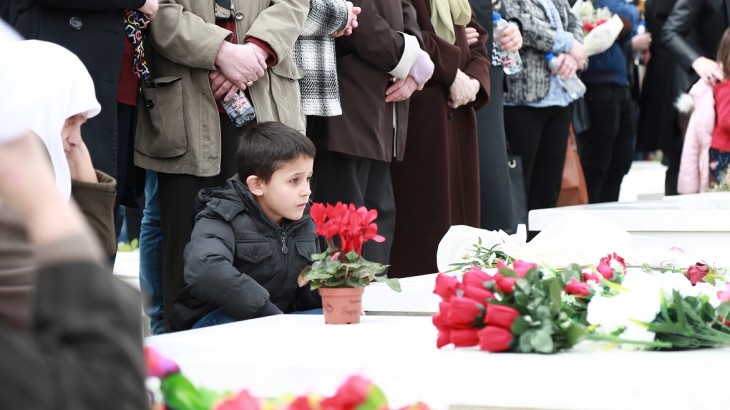 Thousands of people gathered to mark the anniversary of "Krushë e Madhe" (Velika Krusa event), while their families paid homage at the graves of their loved ones. CC BY-NC-ND / ICRC / Jetmir Duraku

The ICRC supports the families of missing people in their quest to ascertain the fate and whereabouts of their missing relatives. It promotes its mandate, history and activities to various interested audiences. The ICRC supports the development of the Red Cross structures in Kosovo with training, funding and technical assistance.

In an effort to resolve the issue of missing people, the ICRC maintains a dialogue with both national and international stakeholders in Kosovo. It continues to chair the Working Group on Missing Persons in relation to the 1998-1999 events in Kosovo (hereafter the Working Group), urging the authorities in Pristina and Belgrade to act in line with their commitments and obligations to provide the families with answers on the fate and whereabouts of their missing relatives.

This mechanism aims at facilitating, on purely humanitarian grounds, the exchange of information between Pristina and Belgrade authorities on missing persons, in particular on potential gravesite locations. As of December 2017, 1,654 people, from various ethnic backgrounds, remain unaccounted for in relation to the armed conflict in Kosovo and its aftermath.

The elucidation of the fate and whereabouts of missing people and an appropriate response to the needs of their families remains the main concern for the ICRC. Since the outbreak of the armed conflict in Kosovo, the ICRC has been collecting information directly from family members.

The ICRC continued to pursue the accessing of international and national archives that might possess information related to gravesite locations and exhumations carried out in relation to the 1998-1999 armed conflict and its aftermath. Additional documentation was made available to the ICRC during 2017, and the discussions are ongoing with other possible sources.

The ICRC continued the dialogue with the Kosovo authorities and other stakeholders on a number of issues, amongst other, to also unblock the process of establishing the centralized register through the ante/post-mortem data-management software. The software is meant to enable the Governmental Commission on Missing Persons and the Institute of Forensic Medicine, to establish, maintain and manage the list of missing persons, in compliance with the Law on Missing Persons.

Aiming to address the long-lasting distress of the families of missing persons, over 400 family members received psychosocial and peer-to-peer support through 12 projects implemented by the Family Associations of missing persons and the local Red Cross (RC) branches, with the ICRC funding.

People deprived of their freedom

In line with its mandate, and based on the agreement with the Kosovo's Interior and Justice Ministries, on cooperation and humanitarian activities to benefit persons deprived of their liberty, the ICRC conducts visits in all places of detention in Kosovo.

In April and November 2017, the ICRC visited the facilities of three places of detention, conducted private interviews with the detainees and followed up the cases of 28 individuals detained. In addition to its usual activities on monitoring the conditions of imprisonment, the ICRC donated 280 books to the Kosovo Correctional Service for further distribution in prisons, aiming at fostering educational and recreational activities.

Promotion of ICRC mandate, history and activities in Kosovo

The ICRC continues to promote its specific humanitarian mandate in protecting and assisting the victims of armed conflicts amongst various interested target audiences.

The Pristina Law Faculty submitted a project proposal on international humanitarian law related themes to the ICRC for potential support.

Cooperation with the Red Cross structures in Kosovo

The RC branches strengthened their Restoring Family Links (RFL) services with the ICRC's technical support and advice. Using the RFL services, the ICRC helps put people in contact with their missing relatives.

Funded by the ICRC, the RC structures organized trainings on RFL in emergencies, needs, practices and tools to their RC staff/volunteers. The ICRC organized a workshop on the management of the dead in emergency situations for first-aid responders of the RCKM.