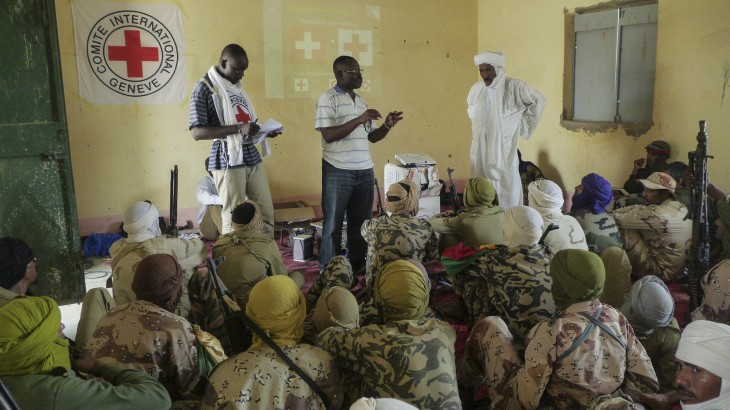 Geneva (ICRC) – The number of non-international armed conflicts more than doubled from the beginning of the century, according to data from the International Committee of the Red Cross (ICRC).

Not only are there more conflicts, but there are more sides in a conflict. More armed groups have emerged in the last six years than in the previous 60.

The consequence: increased danger for civilians and a greater challenge for humanitarians.

Is there a solution? The Roots of Restraint in War, a new study released today, seeks to better understand changing battlefield dynamics. It provides new evidence that talking to armed groups can produce positive results for civilians and humanitarians.

The ICRC seeks to speak to all sides involved in war to secure access for humanitarian assistance and to ensure respect for the rules of war. The increasing number of decentralized groups on the battlefield – often connected through shifting alliances – makes talking to and influencing all sides more difficult, but not impossible.

“Our study demonstrates that formal training in international humanitarian law continues to make a real difference on the battlefield,” said Dr Fiona Terry, one of the report’s authors. “It also points to the broad range of external influence on arms carriers, and shows that informal norms can also have a significant effect on behavior in conflict. This kind of research helps ICRC more efficiently and effectively reach its humanitarian goals.”

Significant facts about today's battlefield environment:
• Only one-third of conflicts are between two parties today. Nearly half of all conflicts (44 %) have between three and nine opposing forces, while a quarter of states in conflict have over ten parties fighting on their territory.
• By the end of the war in Libya (October 2011), 236 separate armed groups were registered in the city of Misrata alone. The Carter Center counted more than 1,000 armed groups fighting in Syria in 2014.
• A significant proportion of today's conflicts (40%) involve jihadi groups. Also notable, the great majority of foreign interventions are directed against jihadi groups

The Roots of Restraint in War study draws on surveys, interviews and analysis of armed forces and groups that include the Australian and Philippines armed forces; Islamist groups like Ansar Dine in the Sahel; South Sudanese armed cattle-keepers; and FARC-EP in Colombia. It contains the first survey of active-duty combatants in State armed forces on issues regarding international humanitarian law, combat ethics and conduct towards civilians during conflict.

The study also points to this fact: Working with opposition armed groups shouldn’t be illegal. By demonstrating that external actors are able to influence the behaviour of armed groups, the study finds that criminalizing engagement with armed groups by humanitarian organizations and local communities is counter-productive to efforts aimed at increasing respect for humanitarian norms.

“With greater respect for the rules of war, people’s suffering in conflict would be greatly reduced. This study provides us with evidence about the factors that cultivate restraint and that contribute to the prevention of violations,” said ICRC President Peter Maurer. “It points to ways that the ICRC and others can ensure that the basic principles of international humanitarian law are embedded in the DNA of all members of armed forces and armed groups.”

The study is available here: https://www.icrc.org/fr/publication/4352-roots-restraint-war