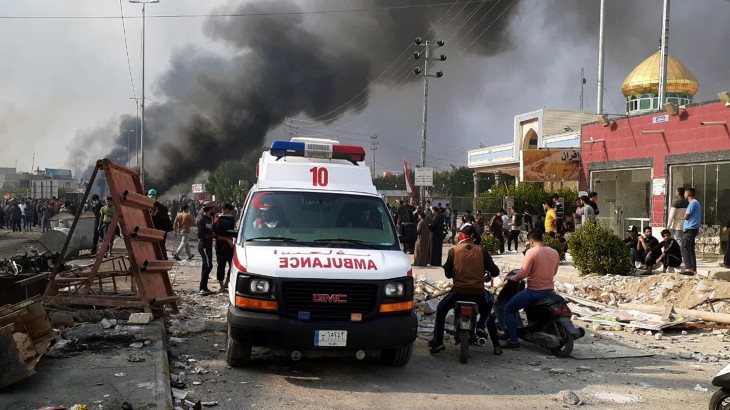 Baghdad (ICRC) – The International Committee of the Red Cross deplores the use of violence and loss of life during the ongoing protests in Iraq.

The rising number of casualties attests to patterns of violence that have so far caused hundreds of deaths and wounded more than 15,000 people.

"Only restraint can stop these patterns of violence to prevent further loss of life and not accept it as the norm," said Katharina Ritz, the ICRC's head of delegation in Iraq. "Citizens have the right to express themselves peacefully without fearing for their physical safety. While security forces have the duty to maintain public order, firearms and live ammunition must only be used as a last resort and to protect against an imminent threat to life."

Moreover, the use of force by security forces must be proportionate to the situation and should be an exceptional measure.

The ICRC's work is closely associated with support to medical services and we have repeatedly heard distressing reports about targeting of health workers, ambulances and medical facilities. These instances include the direct targeting of first responders and their stations, as well as the use of crowd control measures affecting health facilities and putting patients and medical staff carrying out their essential roles at risk.

"We are hearing reports of more attacks on health workers in the past forty-eight hours, hindering them from accessing the wounded," said Fabrizio Carboni, the ICRC's director for the Near and Middle East. "The work of health professionals needs to be facilitated and respected by everyone so that the wounded can be evacuated and receive the timely treatment they need."

Acts of violence against medical personnel, ambulances or medical facilities, as well as the wounded, is prohibited under the law. The media must also be permitted to carry out their work without intimidation or violence.

Since the beginning of the protests in early October, the ICRC has repeatedly supplied eleven hospitals in Baghdad and across southern Iraq with medical supplies to treat the wounded. We also supplied the Ministry of Health with material for field clinics, as well as dressing sets and normal saline solution to Iraqi Red Crescent first aid teams.