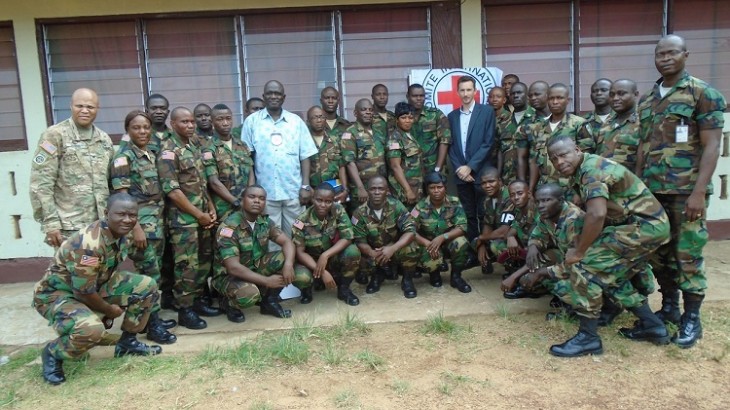 Monrovia (ICRC) – The International Committee of the Red Cross (ICRC) has given a four-day training course in international humanitarian law (IHL) to 24 junior and senior Liberian army officers. The course, which was held at the Edward Binyah Kesselly Military Barracks outside Monrovia, was organized by the ICRC and the office of the chief of training of the Armed Forces of Liberia (AFL).

"Under the Geneva Conventions and their Additional Protocols, every army is required to teach IHL," said Julien Lerisson, head of the ICRC's delegation in Liberia. While the ICRC cannot substitute for the army in this regard, it can provide support, drawing on its experience and knowledge as a guardian and promoter of IHL.

The ICRC helps the Liberian army set up programmes for teaching IHL and integrating it into doctrine, drills and field exercises. The aim is to ensure that the soldiers respect the law and do not violate it in their operations.

"The AFL welcomes the ICRC's support. The training will increase the AFL's national and international credibility and enable soldiers to understand their responsibilities and legal obligations in the conduct of hostilities," said Brigadier General Daniel D. Zainkahn Jr, chief of staff of the AFL. The General went on to emphasize that, as a "force for good", all AFL personnel must be cognizant of the laws governing armed conflict.

IHL is a body of international law – also known as the law of armed conflict – that protects people who are not or no longer participating in hostilities. It also protects civilian property and restricts the methods and means of warfare that parties to a conflict can use.

In order to enhance the AFL's legal advisory capacity, one of the participating officers has been sponsored by the ICRC to continue his IHL training at the International Institute of Humanitarian Law in San Remo, Italy. On his return, he is expected to run the army IHL programme.
The ICRC has worked with the Liberian army for ten years to spread knowledge of IHL and develop the capacity of AFL personnel, some of whom now serve as IHL trainers within the army.