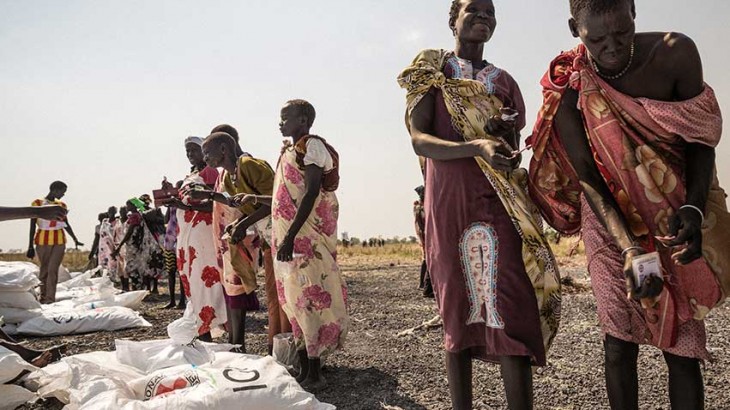 The ICRC is appealing for $400m to help those most affected by the humanitarian crises in Somalia, Yemen, South Sudan and north-east Nigeria. The funds will ensure 5 million vulnerable people receive essential aid.

Speaking at a news conference in Geneva today, ICRC director of operations, Dominik Stillhart, warned a massive scaling up of aid was needed to avert a further spiralling downwards in these countries.

Earlier this month, the UN announced that more than 20 million people were facing famine in the four countries. Mr Stillhart said there was still time to avert a famine in Somalia and Yemen.

"Food, water, shelter and health care is required immediately. With our partners from the Red Cross and Red Crescent Movement, we are increasing our response. We are on the ground and delivering aid in all four countries. We witness the massive suffering. Millions of people are denied the very basics to survive."

The director of operations also underlined the need to directly address the root causes of the crisis.

"No amount of aid money will overcome political obstructionism and a failure to abide by the norms of warfare. Ultimately, in these countries, famine is a by-product. The root cause is the presence of long term, intractable conflict. It's the conflict that renders agricultural land unusable, that forces people to flee their homes, and that destroys hospitals and other vital services," said Mr Stillhart.

Mr Stillhart called on warring parties to make every effort to abide by the norms of warfare, and said States must better use their influence to make this happen. "Violations of the laws of war are directly leading to massive suffering so we need to address how war is waged."

In addition to the ICRC appeal, Red Cross and Red Crescent Movement partners in the 4 countries will need at least a further $100 million to fund their response to the crises.

The ICRC's Middle East director, Robert Mardini, said that with essential goods and supplies running out, there was no time to waste in Yemen: "We're doing what we can, but the needs are huge. The resilience of Yemenis is reaching a breaking point. Parties to the conflict in Yemen must act responsibly. More goods must be allowed into and across the country. Civilians and civilian infrastructure should not be targeted. Humanitarian access cannot be a bargaining chip. To prevent famine, immediate action is needed."

Africa director Patricia Danzi said of Somalia: "Decades of conflict and lack of respect for the rules of war have forced many Somalis to flee their homes time and again, and left them extremely vulnerable. The severe drought and limited access to essential services only increases the suffering. We must act now to avert further tragedy."