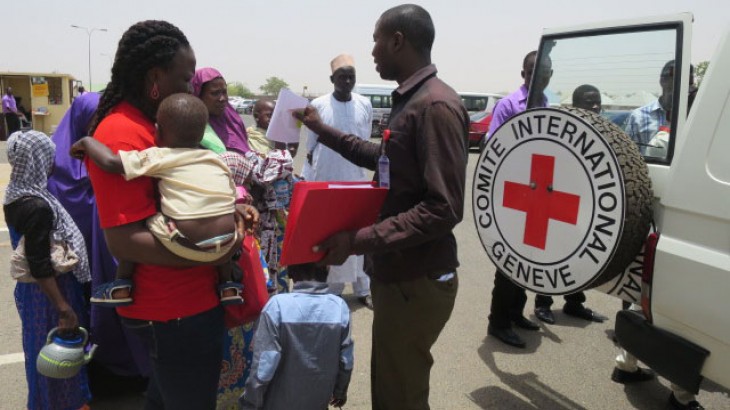 The ICRC's work to restore family links broken apart by war is a key service it provides to reduce the harmful impacts of conflict on civilians. CC BY-NC-ND / ICRC / Umar Sadiq

Maiduguri, Nigeria (ICRC) – When the gunfire began, 10-year-old Alkana and her two younger brothers ran for their lives. The military and the opposition were fighting, and the gunfire sent village residents running for cover..

When the situation calmed, the children's mother was nowhere to be found; she had run into the bush for safety. Their father had left their village two years earlier when opposition fighters took over the region.

Alkana was in charge of her two siblings now. She realised that her 5-year-old brother Ogun had been shot in the leg during the violence that February day. Her younger brother, 12-month-old Ibrahim, had escaped injury.

The military authorities took the children and other internally displaced persons from the village to a transit camp in Mubi, where Ogun was given medical treatment. Alkana would be her brothers' only parent for the next two months.

In late March, when the children's father heard that people from his village had been taken to Mubi, he approached the International Committee of the Red Cross to help reunite his family. ICRC team members tracked down the children and put them in touch with their father by telephone, and a plan was drawn up to reunite the family.

In April, a tearful reunion took place at the end of a flight, on an airport tarmac, when the father was able to hug his three children again. Travellers at the airport gathered around the emotional reunion to wish the family well. When they arrived at the camp in Maiduguri where their father was living, neighbours greeted the children with songs of joy.

When violence associated with warfare breaks out in a village or town, people immediately scatter to find the safest place they can. It's during this chaotic process that family members run in different directions, only to discover later they have no idea where the children went, or where their parents are, or why they can't find their siblings. The ICRC's work to restore family links broken by war is a key service it provides to reduce the harmful impact of conflict on civilians.