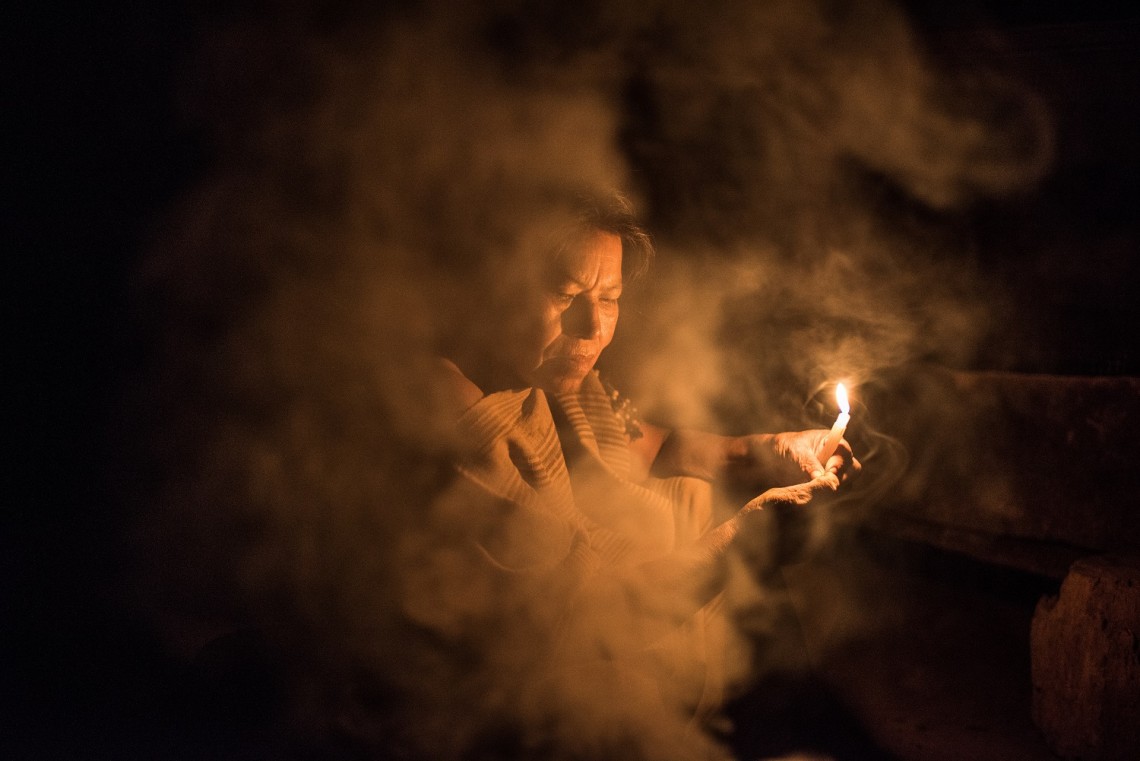 Men make war; women live with the consequences. At least that is the way it is largely perceived.
Article 11 October 2018 Iraq Nigeria Philippines Peru

Women live and react to those consequences, but they are hardly passive victims. They grieve, they fight against the suffering, and many find they are forced to re-invent themselves, shedding an old identity and forging a new one shaped by war.

A new feature by National Geographic, supported by the International Committee of the Red Cross, takes a closer look at how women react to and deal with the disruption that conflict brings to family and work life.

In the project, A Woman's War, we break open the stereotype of "women as victim" and explore the multiple, complex, sometimes conflicting roles women play in conflict: fighters, humanitarians, mothers, daughters, laborers, community leaders and survivors.

"I believe that women are agents for change. I believe that women are major sources of stability in conflict-affected areas and that they hold together not only their families but their communities," said Mary Werntz, the deputy director of operations at the International Committee of the Red Cross. "My hope is that we all, humanitarians included, are able to look at women in their complete forms and not just as victims of something."

The lives documented are diverse. Photographer Robin Hammond visited a war he knows well – Iraq – as well as conflicts that seldom make global headlines, in the Philippines and southern Nigeria. Identities continue to be shaped by war even when the guns fall silent, so Hammond also travelled to Peru to see old scars that have not yet healed.

Working on gender is complex. It combines power and privilege, community rituals and expectations. Conflict tends to exacerbate existing inequalities. What happens when the family breadwinner – often a male – goes off to war or is killed by the violence? Societal roles shift; women may be given an opportunity they previously didn't have.

"I think in many conflict situations women are forced into being the ones in charge of the family," Werntz said. "Women may have to take care of the agricultural areas. They may have to move into the workforce. They have to look after the kids' education."

With this new project, National Geographic and the ICRC explore the multiple identities women step into through a series of portraits, part environmental, part studio.

Each unique portrait, taken against a background significant to the subject's story, is crafted to challenge the simple labels we attach to women in war, and to question the role of photography to provide singular answers to complex issues. 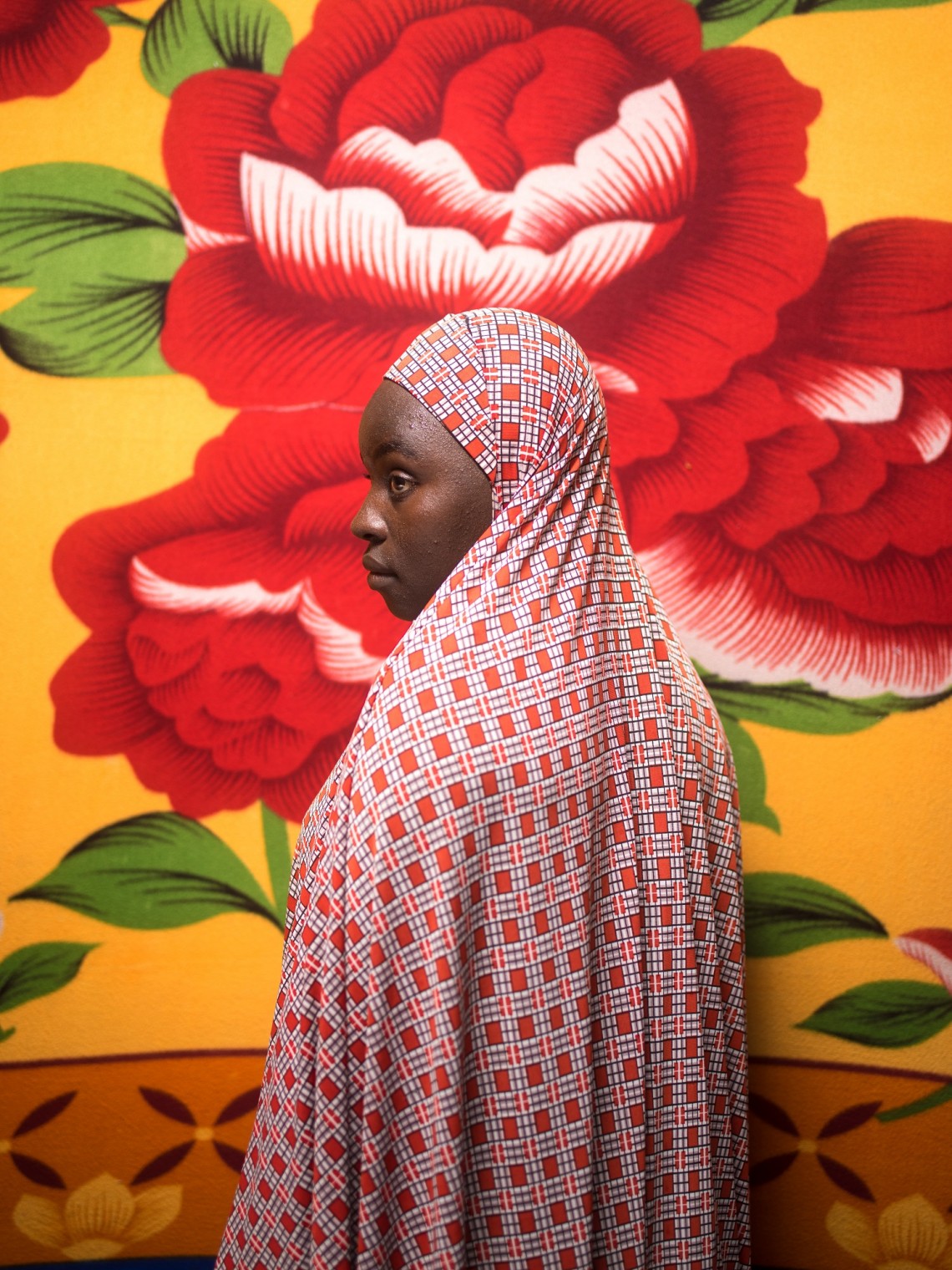 My hope for the future is to return to our homes in peace.

Fatima, 17, lives with her sister and mother in a camp for the displaced in Maiduguri, Nigeria. When she was 15 years old, her village was attacked. "In the evening at about 5 pm, when the people had finished eating food, we heard gunshots. I remember shivering with fright. Unknown to us, the village had been surrounded and was being invaded.

There was no room for escape. We hid in a room, the sound of gunshots coming closer. Stray bullets penetrating our roof. We covered ourselves with mattress and cried for help to no avail." Fatima said that most of the men had fled already. They were kept in a room for a week without food before being released. Once they left the room, the women immediately scattered.

Fatima went one way, her mother went another. They hid in the bush. It would be 18 months before they would see each other again. 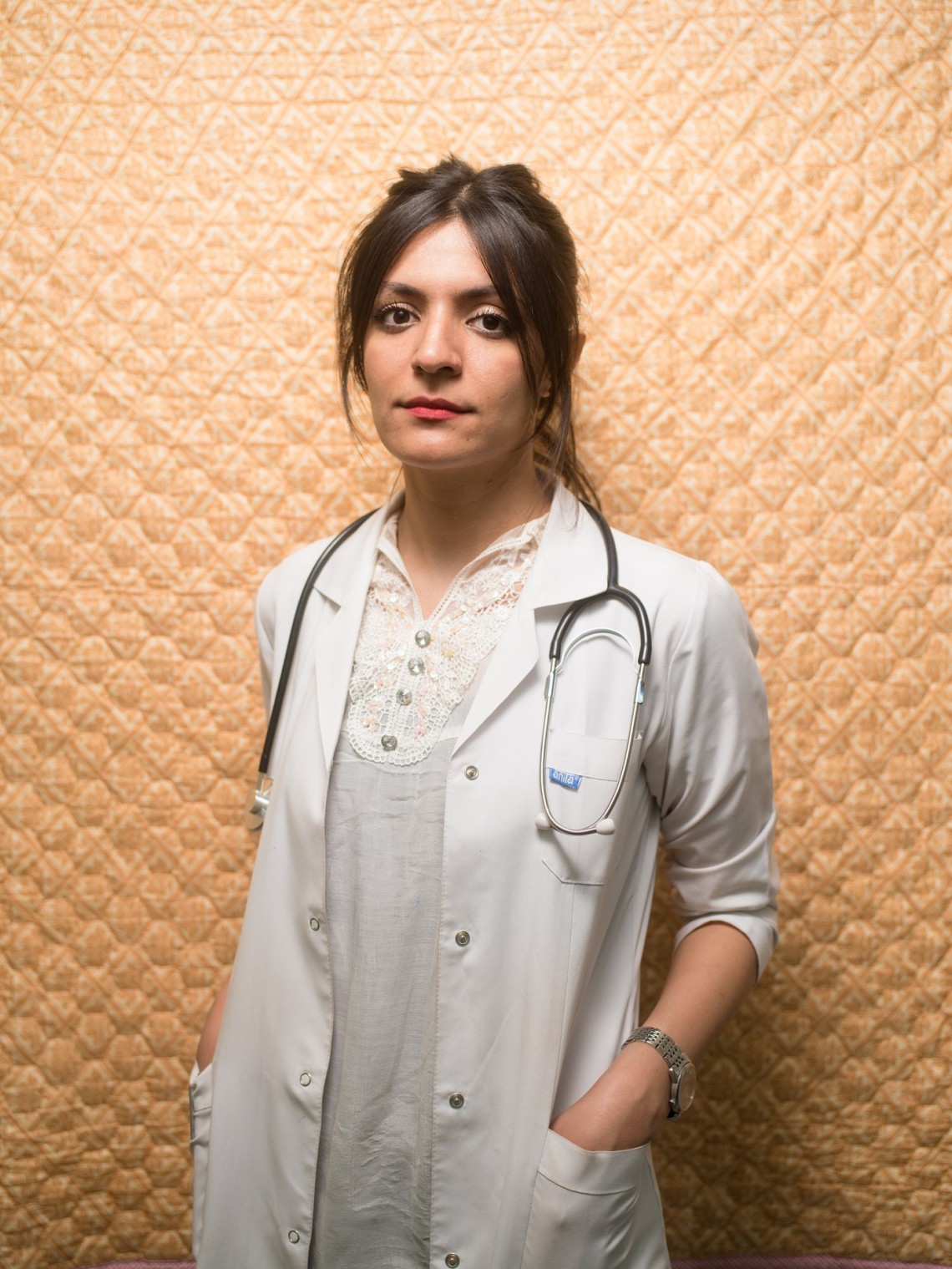 To be a woman in this conflict means to be resilient.

A medical doctor and second-year intern, 25-year-old Hozan Badie Sindi is standing in front of her blanket in her hospital room where she sleeps when she is on call. She has spent most of her life living with war. West Erbil Emergency Hospital, also known as Rozhawa Hospital, has received hundreds of wounded and trauma cases from the conflict in Mosul.

The ICRC has been supporting the Rozhawa Hospital and others especially in the treatment of people injured in the conflict. Erbil, Iraqi Kurdistan. "I have suffered with the people living through the conflicts, but I want not only to feel pain but to stop the pain, stop others from feeling the pain. I really want to do something for them but unfortunately I can't, sometimes it's just out of your hands. Being a woman, I can give them emotional support. I can tell them that I understand a bit of what they're going through. Maybe, by being a woman, it has added some sadness to my soul, but this is the way it is. To be a woman in this conflict, you can't just describe it in one word. She is someone who tries very hard to survive and help others survive. So basically, that is my idea. To be a woman in this conflict means to be resilient. To work hard every day, to try to neutralize the situation I want the next generation to understand so that this conflict never happens again." 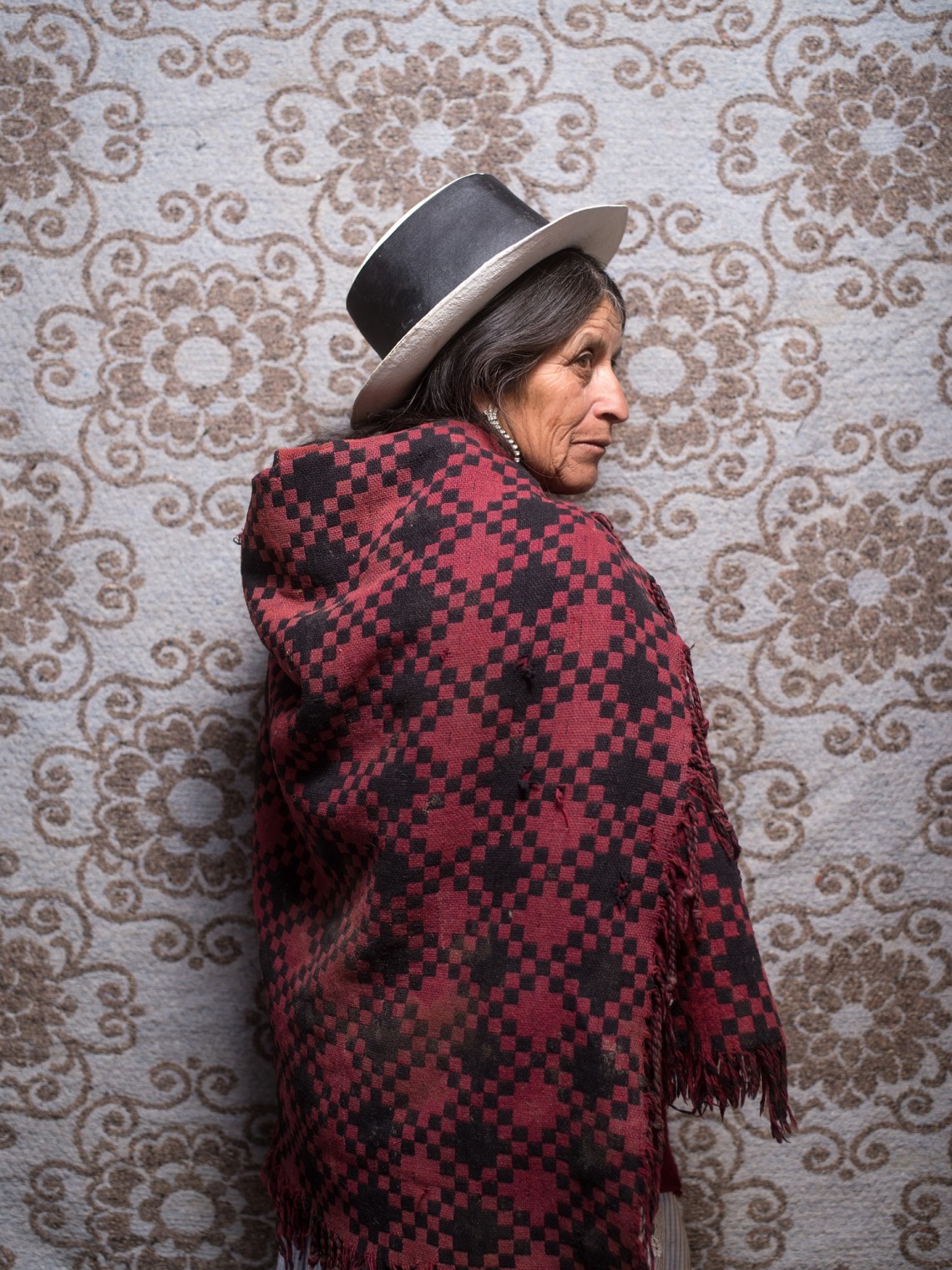 I was a victim then I became a fighter.

Dionisia Calderon sells fruits and potatoes in her home village of Morochucos, Ayacucho, Peru. The 54-year-old faced multiple losses during the internal conflict that brought violence and suffering to the region. Her first husband vanished without a trace.

Her second husband was also taken and tortured severely. He later died from the resulting injuries. Refusing to silently live with the injustices inflicted upon her and her family she became a representative of women who faced sexual abuse during the conflict.

"I used to say to myself, 'Why was I born a woman? Why wasn't I born a man?' We women have been through so much, with the soldiers and Shining Path. It was difficult. It was difficult to bear all that violence. We were all marginalized, criticized for what we had been through. I felt awful. I owe my life to those women who said to me, 'You're not what you think you are. You're not what people say you are, because those people don't know. You're a woman and a fighter. You need to keep fighting. You need to face these things.' I was a victim of the internal armed conflict and then I became a woman who fights for justice and truth." 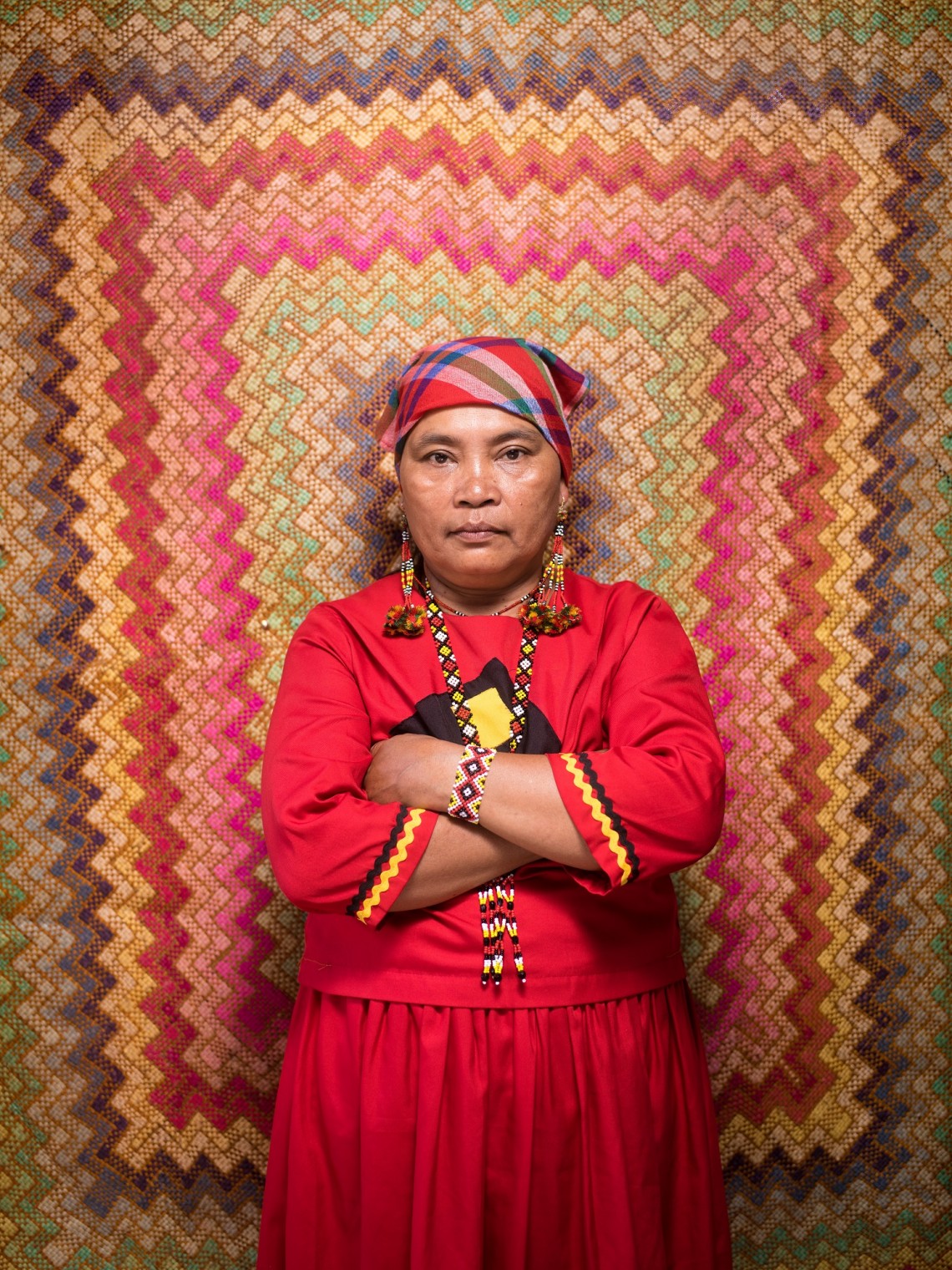 I am a victim and I am a survivor.

Eufemia Cullamat, a 57-year-old farmer, is advocating an end to mining companies' activities on her ancestral lands in Surigao del Sur province in Mindanao, Philippines. Her cousin, leader of a movement against the big mining companies, was executed in 2015 along with two others. Indigenous people in the provinces of Davao del Norte, Surigao del Sur and Bukidnon are confronted by harassment and displacement from their native lands.

Hundreds of families opted to leave their communities and homes for other areas. The ICRC has provided relief and eventually livelihood assistance to communities in Surigao del Sur when they evacuated their homes.