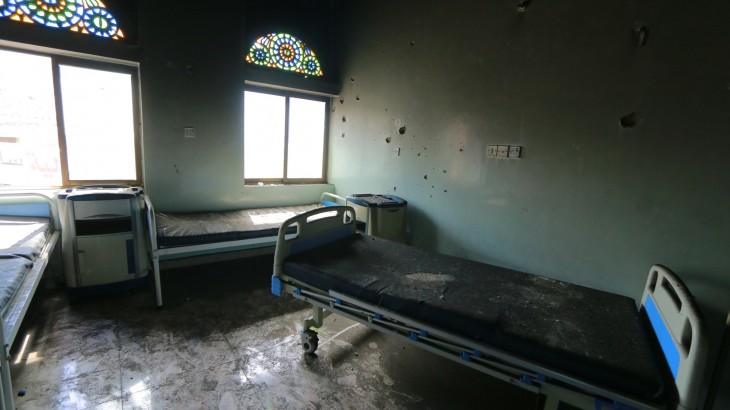 Burned beds and stretchers at Al Mudhaffar Hospital, which was damaged as a result of clashes in Taiz earlier this week. The ICRC dispatched urgent medical supplies and a team of technicians to fix the damaged generators. CC BY-NC-ND / ICRC / Khaled al-Saeed

Yemen/Geneva (ICRC) – Four years after the beginning of the conflict in Yemen and only a few months after agreements that gave hope to a war-weary nation, a renewal in hostilities is again forcing people on the move and taking the country from bad to worse.

Hopes that violence, displacement, disease and hunger would begin to subside after years of misery in Yemen are being crushed by a renewal of conflict.

“Despite a glimmer of hope a few months ago, for millions of Yemenis life has become unbearable. The renewed fighting only serves to exacerbate an already catastrophic situation,” said Franz Rauchenstein, the head of the ICRC delegation in Yemen.

Despite recently brokered agreements, the ICRC in recent days has witnessed a spike in violence across the country. The resumption of hostilities involving all sides has led to more displacement and compromised the safety and wellbeing of hundreds of thousands of Yemenis exhausted by a conflict now entering its fifth year.

This week the ICRC urgently dispatched more than seven metric tons of medical supplies and a team of technicians to do repairs at the Al Mudhaffar Hospital in Taiz. In Hajja, the ICRC is distributing food and essential household items to more than 1,640 displaced families affected by the recent events.

The ICRC is concerned about the reported fighting and armed clashes along the Red Sea Coast, Hajja governorate and Taiz City. The use of explosive weapons with wide-area effects should be avoided in populated areas due to the significant likelihood of civilian casualties. Critical essential infrastructure, such as health structures, water and electrical facilities and supply networks, are particularly vulnerable to incidental effects of such explosive weapons.

“Contrary to the rules that govern warfare, civilians are often being denied the protection to which they are entitled. They again are paying the heaviest price for the conflict in Yemen. In accordance with international humanitarian law, parties and states supporting them must do more to spare and protect civilians during the planning and execution of military action,” Rauchenstein said.

The ICRC is in contact with all sides to remind them of their responsibilities under international humanitarian law.