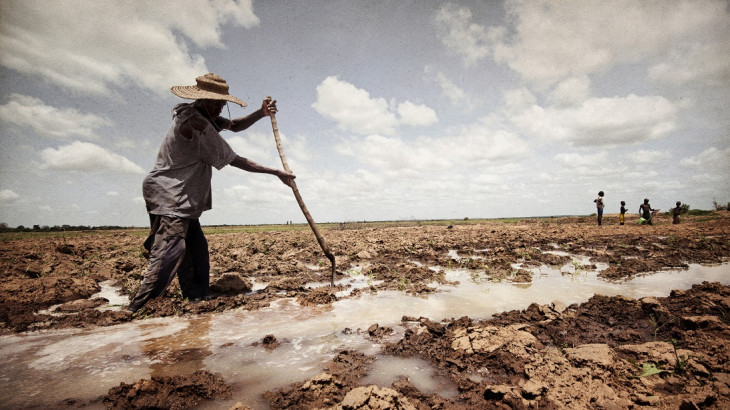 Countries enduring conflict are less able to cope with climate change because their ability to adapt is weakened by conflict. Samuel TURPIN / Humans & Climate Change Stories

A new ICRC report, When rain turns to dust, explores how countries enduring conflict are disproportionately affected by climate change and climate variability.*

Here are seven things you need to know:

1. Of the 25 countries deemed most vulnerable to climate change, 14 are mired in conflict

The Notre Dame Global Adaptation Initiative (ND-Gain) Index looks at a country's vulnerability to climate change and other global challenges, set against its ability to improve resilience. Yemen, Mali, Afghanistan, Democratic Republic of the Congo and Somalia, all of which are dealing with conflict, are among the lowest ranked.

This is not to say that there is a direct correlation between climate change and conflict. Rather, it suggests that countries enduring conflict are less able to cope with climate change, precisely because their ability to adapt is weakened by conflict.

People living in conflict zones are therefore among the most vulnerable to the climate crisis and most neglected by climate action.

2. Climate change does not directly cause conflict, but...

Scientists generally agree that climate change does not directly cause armed conflict, but that it may indirectly increase the risk of conflict by exacerbating existing social, economic and environmental factors.

For example, when cattle herders and agricultural farmers are pushed to share diminishing resources due to a changing climate, this can stir tensions in places that lack strong governance and inclusive institutions.

The following case study from Mali, which has seen years of conflict, illustrates this point.

West Africa was hit by a long drought in the 1970s that led to famine. Isa, a community leader from northern Mali, said, "At that time, we only had to search for food. We could move freely with our animals. Now, we can't even search for food. We are forced to stay in place or move to cities because of the insecurity."

In early 2019, grazing land became scarce south of Gao, due to floods. Pastoralists were worried about travelling with their livestock for fear of being attacked by armed groups or bandits. Instead, they often gathered in areas close to water sources, creating tensions with farmers and fishermen. As their animals became weaker, herders were forced to sell them at discounted prices.

Insecurity prevented them from reaching livestock markets further afield, where they could have hoped for better prices. State officials – and potential state support – were absent because of the violence. Violence also considerably limited humanitarian access.

In short, impoverished herders watched their only assets wither and were left struggling to feed their families. 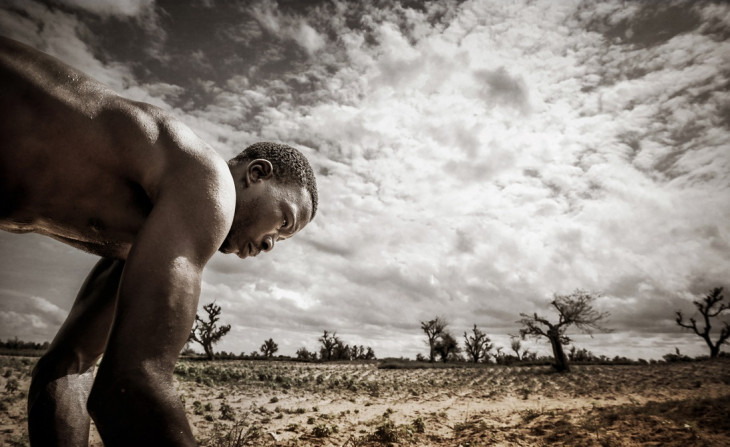 People living in conflict zones are among the most vulnerable to the climate crisis and most neglected by climate action. Samuel TURPIN / Humans & Climate Change Stories

4. Adapting to climate change can be relatively simple, but it tends to be complicated

In certain circumstances, a change in the crops being cultivated might be sufficient. But adapting to climate change may also require major social, cultural or economic changes. A whole agricultural system might need to change, or diseases new to a geographical area might need to be dealt with.

Concerted efforts to adapt tend to be limited in times of war. In a conflict situation, authorities and institutions are not only weak, but also preoccupied with security priorities.

5. The natural environment is frequently a casualty of conflict

Too often, the natural environment is directly attacked or damaged by warfare. Attacks can lead to water, soil and land contamination, or release pollutants into the air. Explosive remnants of war can contaminate soil and water sources, and harm wildlife. Such environmental degradation** reduces people's resilience and ability to adapt to climate change.

The indirect effects of conflict can also result in further environmental degradation, for example: authorities are less able to manage and protect the environment; large-scale displacement places strain on resources; natural resources can be exploited to sustain war economies. In Fao, south of Basra, Iraq, people blame their water and farming problems on the felling of date palms for military purposes during the Iran-Iraq war.

Conflict can also contribute to climate change. For example, the destruction of large areas of forest, or damage to infrastructure such as oil installations or big industrial facilities, can have detrimental climate consequences, including the release of large volumes of greenhouse gases into the air.

As early as 1977, states afforded the natural environment protection against widespread, long-term and severe damage through Additional Protocol I to the Geneva Conventions.

Watch explainer on the laws of war and nature:

Greater respect for the rules of war can reduce the harm and risks that conflict-affected communities are exposed to as a result of climate change.

For example, climate change can drive water scarcity and reduce the availability of arable land. By prohibiting attacks on objects indispensable to the survival of the civilian population, such as agricultural areas and drinking water, IHL protects these resources from additional conflict-related violence.

The climate crisis is altering the nature and severity of humanitarian crises. Humanitarian organizations are already struggling to respond and will not be able to meet exponentially growing needs resulting from unmitigated climate change.

Major efforts – in the form of significant systemic and structural changes, political will, good governance, investment, technical knowledge, a shift in mindsets – are needed to limit climate change.

Humanitarian organizations must collaborate to strengthen climate action. While people in conflict zones are among the most vulnerable to climate change, there is a gap in funding for climate action between stable and fragile countries. A greater share of climate finance needs to be allocated to places affected by conflict to help communities adapt to climate change.

*Climate change refers to any change in the climate that persists for an extended period – typically, decades or longer. Climate variability refers to fluctuations in climatic conditions within a smaller time frame, such as a month, a season or a year. Variations, such as the frequency or intensity of rainfall, tropical cyclones, temperatures, etc., can be exceptional and part of natural climate variability. Persistent variations may suggest a potential change in the climate.

** Environmental degradation is a process through which the natural environment is compromised. This can be an entirely natural process, or it can be accelerated or caused by human activities.