Armed conflict and violence have reverberated throughout this pandemic and there is hard evidence to prove it. 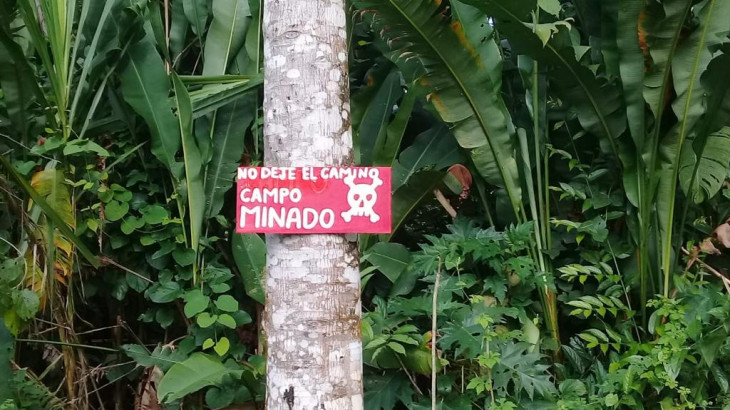 In 2020, we reported 389 victims of explosive hazards, the highest number in the last four years.

Most victims are civilians living in rural areas who happen upon these hazards as they go about their daily business in search of water or walking along roads. The accidents took place in 69 municipalities across 17 departments.

Some municipalities* had not reported any victims in recent years, which suggests the problem has resurfaced in areas where it had become a thing of the past.

It is hard to estimate the level of contamination caused by explosive hazards in Colombia. Huge progress has been made by humanitarian demining since the peace agreement was signed between FARC-EP and the Colombian government, but it is still hugely challenging to decontaminate certain areas and to provide guarantees of non-repetition for victims, particularly where armed conflict and violence ravages the country. 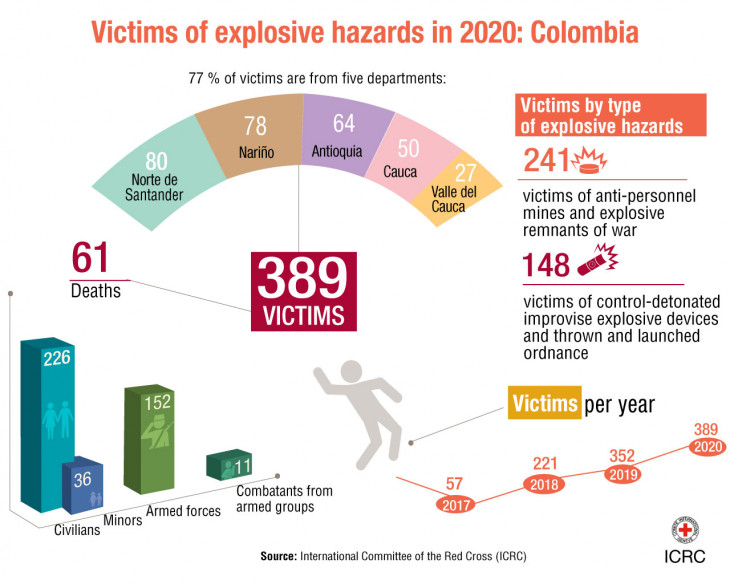 The challenge in these areas is magnified because it goes beyond the long-standing presence of these explosive hazards and includes new weapon contamination resulting from current armed conflict and territorial disputes between armed groups.

In Colombia, the presence of explosive hazards has a direct impact on civilians, who suffer the worst consequences from armed conflict and violence. These explosive hazards include anti-personnel mines, the best-known type, as well as explosive remnants of war, thrown and launched ordnance and control-detonated improvise explosive devices** which are all causing increasing numbers of casualties.

The number of victims gives us an idea of how serious the problem is, but it is not the only metric. In 19 municipalities where accidents were reported, there were also issues of confinement or displacement, showing just how many humanitarian consequences stem from this one issue.

Explosive hazards pose a silent and latent threat to rural communities. Since the location of each hazard is unknown, people live in permanent fear and are unable to move around freely, which in turn affects their ability to earn a living.

*41 of the 69 municipalities affected in 2020 did not report any accidents in 2019.
**Explosive devices activated remotely or manually, using a timer, remote control or other mechanism.