Overview of the humanitarian situation in Colombia

Many communities experienced greater levels of fear as their exposure to risk increased.

Against the backdrop of the pandemic, the humanitarian consequences of armed conflict worsened, as did violence against civilians in some parts of Colombia.

We are particularly concerned about the increase in the number of murder victims – people who are protected by international humanitarian law (IHL) and other humanitarian rules – as well as the increase in violence used by weapon bearers to maintain social control over territories. 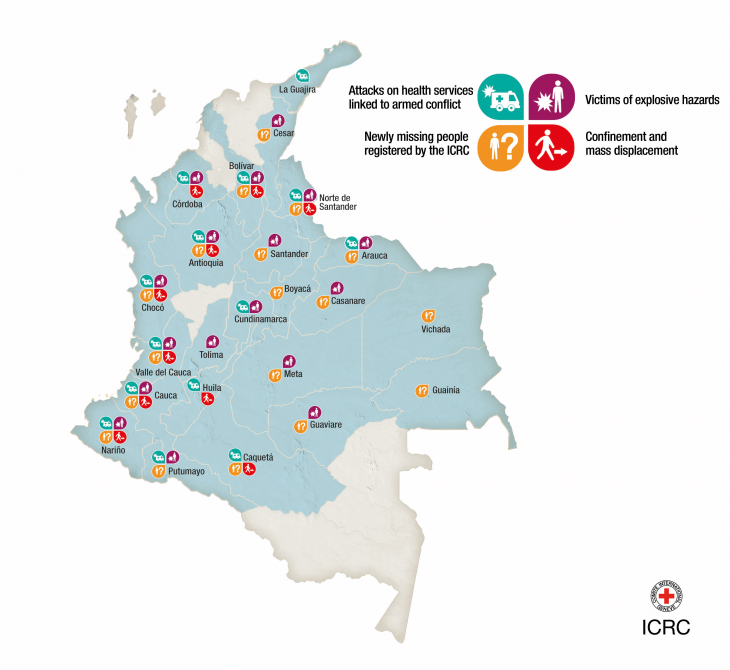 The map of Colombia shows a worrying scenario, but the reality is even more complex.

In some areas, armed groups imposed severe restrictive measures under the guise of preventing the spread of the virus. Communities saw their freedom of movement restricted, their ability to make a living destroyed, and their access to essential health services limited.

They faced fear and intimidation, knowing they risked threats and murder if they failed to comply with these social control measures.

Over half of Colombia's departments suffered these humanitarian consequences all at the same time, with Antioquia, Cauca, Chocó, Nariño, Norte de Santander, and Valle del Cauca accounting for the highest percentage of affected people. However, even less densely populated areas, such as Caquetá, Guaviare, and Putumayo, saw an upsurge in violence.

The pandemic presented new challenges in terms of assisting people affected by armed conflict and violence because as they became more isolated, their plight was hidden from view

In the worst-affected regions, civilians were at greater risk of harm and under huge pressure, but this was not evident.

The fact that there are few state organizations in the areas most affected by conflict, combined with the effects of the pandemic and the worsening humanitarian situation, made it difficult for civilians to maintain decent living conditions and to stay safe.