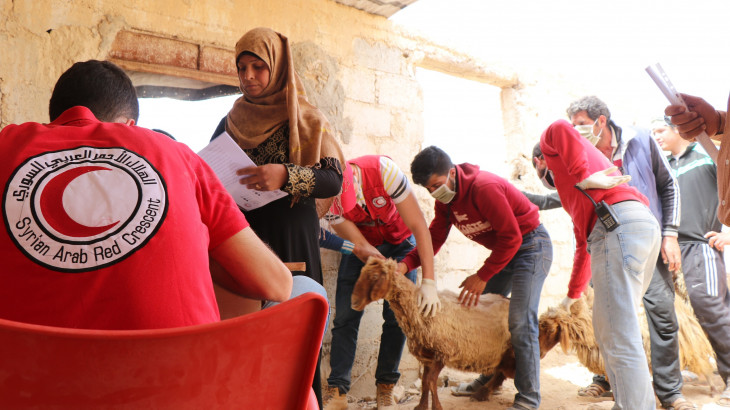 The ICRC's economic security team and Syrian Arab Red Crescent livelihood team distributing sheep to returnees to Mehin town in east rural Homs. The ICRC and SARC teams are taking prevention measures against COVID-19, as they disinfect the place of distribution, wear PPEs and consider the physical distance as much as possible. Anas KAMBAL/ICRC

• In Nigeria, 95 per cent of people we talked to told us their sources of income have suffered

• In Iraq, 83 per cent of people told us livelihoods have suffered

• In Ukraine, 75 per cent of people reported an increase in the price of basic items

Geneva (ICRC) – New survey data serves as a warning that economic hardships brought about by the COVID-19 pandemic could foster a boom in aid-dependency in countries at conflict without coordinated responses from governments, international financial institutions and humanitarian and development actors, the International Committee of the Red Cross (ICRC) said on Wednesday.

Without concerted action from the global community, we expect humanitarian needs to deepen and worsen in the wake of COVID-19. It is likely that new short- and longer-term health and protection needs will emerge, and that otherwise relatively resilient communities will need assistance.

The ongoing economic and food security impact of COVID-19 is massive and appears likely to worsen over time. In countries at conflict, millions already live with little or no health care, food, water and electricity, as well as volatile prices and destroyed infrastructure. COVID-19's impact could set in motion a vicious cycle of lost income, deepening poverty and hunger.

Early indications in conflict zones where the ICRC operates shows the vast impact of COVID-19:

"COVID-19 is causing a tremendous financial shock for families, particularly in conflict zones. I fear that without coordinated action from governments and humanitarians, the long-term consequences will be crippling," said Charlotte Bennborn, the head of ICRC's economic security department.

The ICRC calls for social protection programmes to be maintained or extended, and that they include the most vulnerable. Existing humanitarian activities focused on food security, nutrition and livelihoods must also be reinforced.

The typical coping mechanism that families use to overcome lean times — asking for loans from neighbours or family, reducing purchases, using savings — have been exhausted for many. The hardest-hit households were already food insecure, with physical and financial access to food markets restricted due to COVID.

"In the near term, strengthening health, water and sanitation systems in conflict zones, to prevent and manage infectious disease transmission, must become a priority," said Esperanza Martinez, the ICRC's head of health.

Additionally, income shortages could hit families at a time when countries struggle to provide essential services, deepening food insecurity for people already at risk. When movement restrictions are imposed, people face a dire choice between earning a living and protecting their health.

Families that depend on remittances from migrant relatives are also at risk, as income opportunities even in wealthier countries deteriorate. Global remittances are projected to decline by 20 per cent in 2020 due to the COVID-induced economic crisis, according to the World Bank. In Yemen, for instance, COVID-19 has led to a significant diminution of remittances - perhaps as much as 70 per cent in Yemen, where the price of a food basket (rice, lentils, milk, flour, beans, cooking oil, sugar, salt) has risen 60 per cent since the conflict began in 2015.