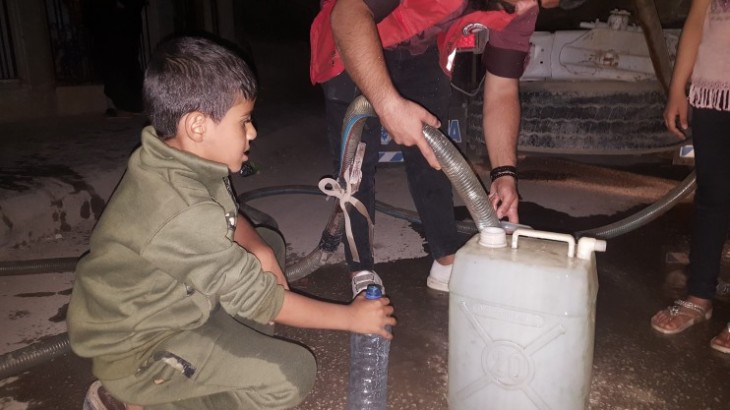 The north-east of Syria is facing a scarcity of water.

Geneva (ICRC) – An update from the International Committee of the Red Cross (ICRC) on the situation in north-east Syria:

_ The ongoing hostilities are having a devastating impact on the civilian population, with tens of thousands of people fleeing their towns and villages near the border. The immediate area around where hostilities are taking place may result in the displacement of 300,000 people who are living in main cities in two governorates, Hassakeh and Raqqa.

_ Water shortages are a major concern that the ICRC and Syrian Arab Red Crescent are working to address. There are concerns that Hassakeh city (approximate population 400,000) may run dry as the main water station serving the area has been affected, affecting hundreds of thousands of people, and several emergency measures have been taken to provide clean water from alternative sources. Water infrastructure (water stations and dams) are located near the current frontline, and it is critical that they are protected.

_ The people who have fled their homes need shelter and emergency humanitarian assistance. The ICRC, along with the Syrian Arab Red Crescent, is supporting hundreds of such families in Hassakeh. The families – mostly women and children – are staying with family or friends, and other host families are sharing their homes, food and water. Other new arrivals are in staying in schools that have been turned into makeshift shelter. Such upheaval also has a ripple effect: thousands of students in Hassakeh now can't attend school.

_ Here's how the fighting is affecting one family. Um Ali, 38, is from Ain Issa town: "We had just finished lunch when we heard a big explosion near our house. My small children started crying. My husband and I took our kids, left the house and walked for hours. We did not have money to rent a car to reach Hassakeh so it took us two days to reach the city. Now, we are staying in this school where we feel a bit safer, but we brought no food, no water, no mattresses."

_ How ICRC/Syrian Arab Red Crescent is helping: More than 515 families (more than 2,500 people) have been assisted so far in several schools in Hassakeh that were turned into emergency shelters. Distributed items include canned food, blankets and mattresses, and bottled water. Their teams are working on alternative emergency solutions for water, for example: supporting a local water board to restart a water treatment plant; equipping boreholes to provide emergency drinking water for water trucking in some locations; and organizing water trucking in Hassakeh city, which served residents, internally displaced people centers, a health center and two bakeries. AV News available here.