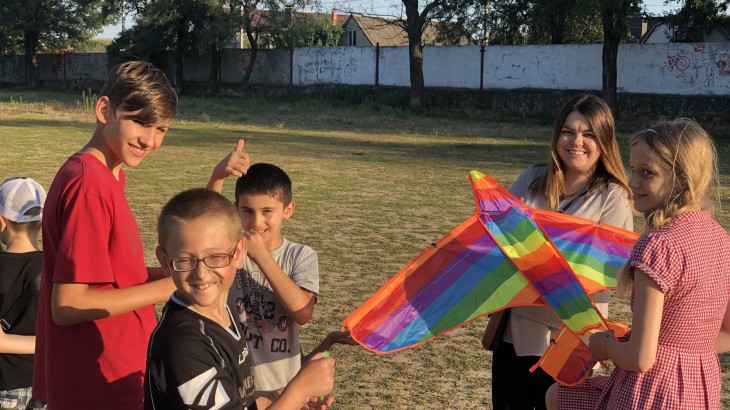 Space is precious in the dormitories on Komkova Street in Kherson. The identical buildings facing each other have for some decades been home to families of those working at shipbuilding yards. Since 2016, these buildings have also become a place of refuge for the internally displaced people, including women, children and the elderly, fleeing the hostilities in eastern Ukraine. Like the structures they live in, the tenants are grouped close together yet sharply distanced by walls of mutual distrust and hostility that spurt out in quarrels and disagreements. The undercurrent of animosity has made it difficult for people, especially the children, to integrate into the community since many have already had traumatic experiences while escaping hostility.

But all is not bleak on Komkova Street.

A vibrant summer camp for children has been stringing together the fragmented relationships in the dormitories, bringing back laughter and easing the trauma caused by the violent conflict. Initiated by the International Committee of the Red Cross (ICRC) and run by volunteers of the Ukrainian Red Cross Society's Kherson branch, the summer camp is preparing the kids for the upcoming academic sessions through a variety of learning activities. 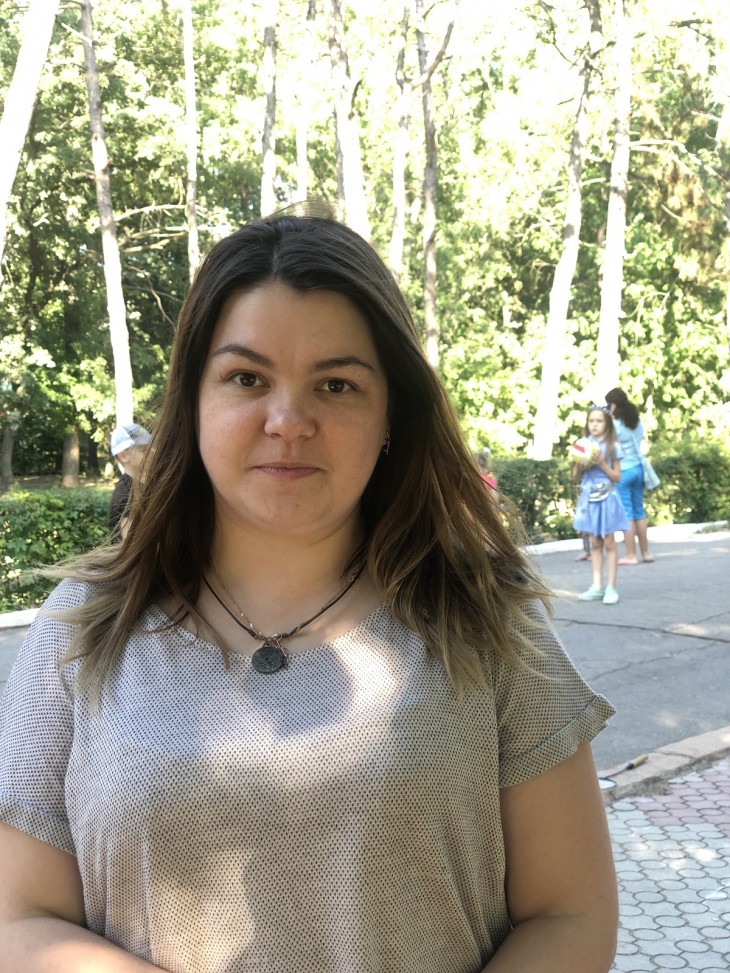 Valentyna, a volunteer of the Ukrainian Red Cross Society and a project manager of the summer camp. CC BY-NC-ND / ICRC / A. Marchuk

Valentyna Bakanova, the project manager, shares that only about 15 children attended when they began the sessions in July this year. "Soon word spread and more children began coming. Now I work with 30 kids, most of whom are in elementary school. We meet three times a week for three to four hours," she says.

Exposed to the grim realities of conflict at a young age, the children are not an easy group to work with. "In the beginning, while some were afraid of loud noises a few of them were reluctant to participate or often picked fights," says Valentyna. But she is able to relate with their struggles as her family had also fled from Horlivka, Donetsk region, in 2014. "We had no idea where to go and what to do. The local Red Cross helped us a lot. When our financial situation improved, I decided it was time to grow from being a beneficiary to a volunteer," she shares.

As Valentyna and her team engage the children, several mothers come and watch. While looking out for their children they also get some time off their own routines and a chance to socialize with the other women. They all agree that their kids are much more relaxed now. 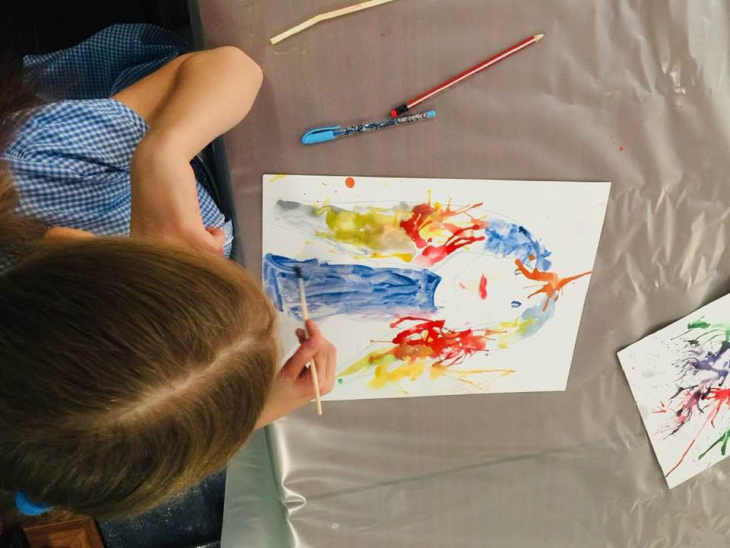 Tanya and Makar are among the kids who prove that the hard work Valentyna puts in is worth the effort. Escaping the growing hostility in Donetsk, Tanya moved to the dormitory with her mother Olga and three siblings five years ago. Though the seven-year-old girl cannot talk like other kids her age, she uses monosyllables to express herself surprisingly well. "Three of my children are attending the summer camp and I also join them. We have not missed a single day and we can hardly wait for the next session," says Olga, adding that art and craft classes are everyone's favourite. 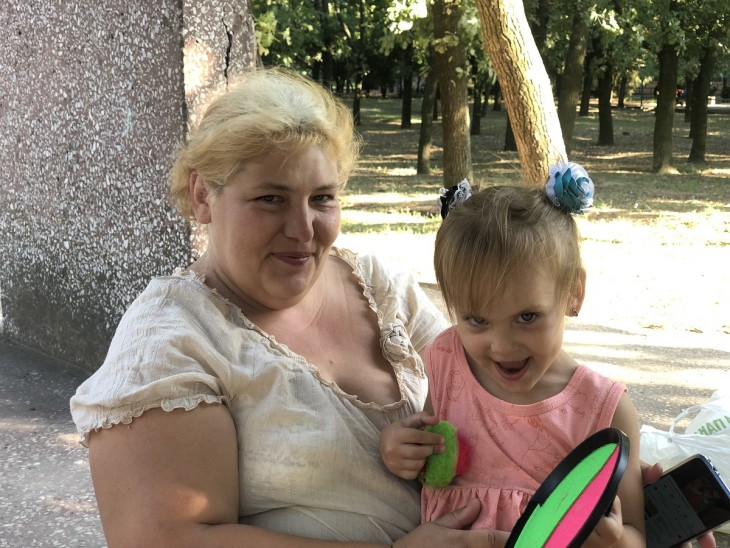 Olga and her youngest daughter. CC BY-NC-ND / ICRC / A. Marchuk

Makar is only four, but he fearlessly joins each game. His happy smile reveals the value of simple things such as playing, learning and being with other children. Makar's mother, who is one of the old occupants of the dormitory, says these activities are very important for her son. "He is rapidly losing his hearing ability because of complications caused by an ear infection. He needs cochlear implant or he may even forget how to speak. He also suffers from other health issues," she shares. With two more kids to care for, Makar's mother is struggling but makes it a point to be there for the summer camp sessions. "I am able to rest here and I like to see Makar play with the other children. He asks me every day: 'Is there a party today?' He means the camp, of course," she smiles. 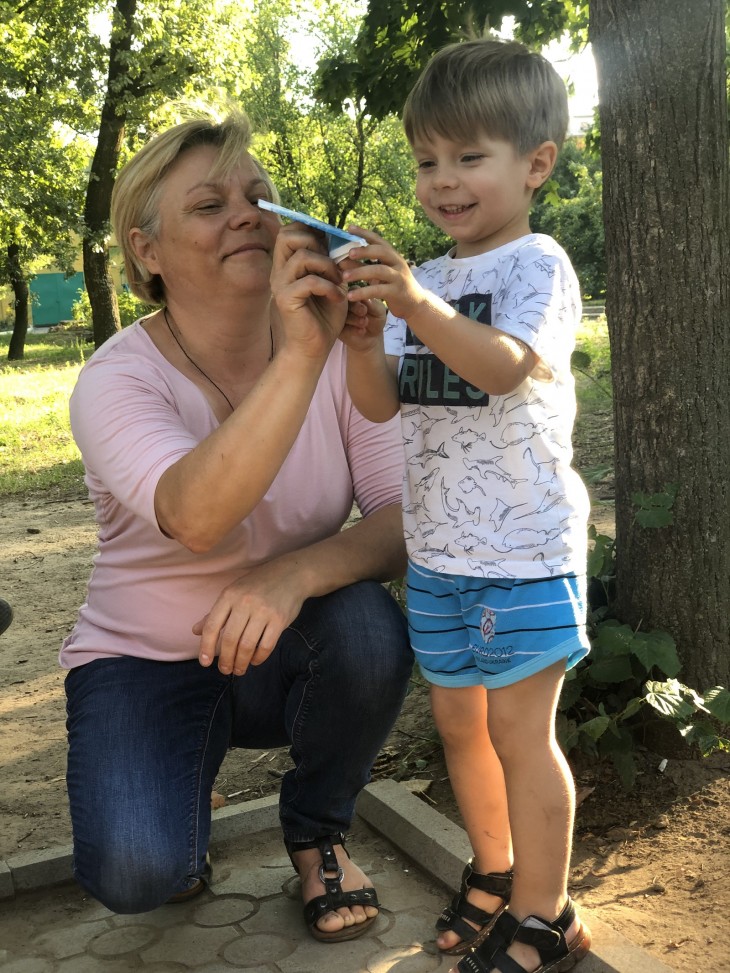 Makar with his mother. CC BY-NC-ND / ICRC / A. Marchuk

Even though the project was conceived as a summer camp, the mothers hope that the classes will continue at least during the weekends even after school begins. They say that there are practically no activities for children in the area or they are too expensive for them to afford. The summer camp is their place of kindling hope and finding rest.