South Sudan: Life on the run in Leer 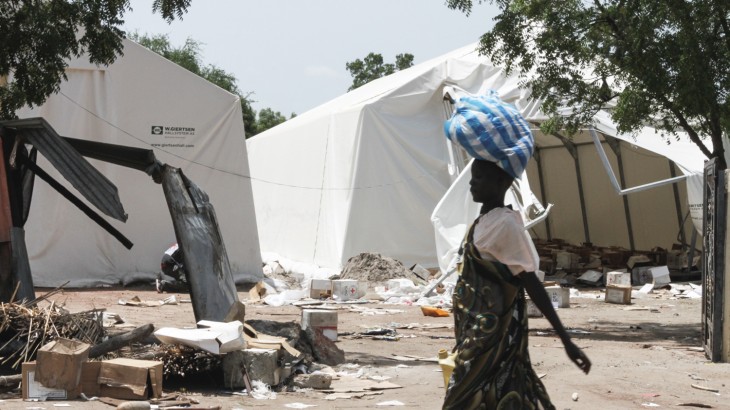 A woman in the town of Leer, South Sudan, walks by the compound of the ICRC at the end of May 2015. Citizens began returning to Leer after fleeing the town because of an impending military attack. The ICRC offices were looted of all their electronics and furniture and three vehicles were stolen. CC BY-NC-ND/ICRC/Jason Straziuso

South Sudan's violence, civilian upheavals must stop. Daniel Littlejohn-Carrillo arrived in South Sudan to begin his work with the ICRC shortly before the latest violence broke out around Leer in May. Article courtesy of Al Jazeera.

A loud hiss whistles out as we deflate the Land Cruiser's tyres. A colleague sprays white paint over the big red crosses that are meant to protect the cars and identify them as International Committee of the Red Cross (ICRC) property. Now five of them are immobile, or so we think. The one remaining vehicle will take us to the airstrip shortly.

Fighting is threatening the town of Leer in South Sudan, and we are reducing operations. I will be leaving, evacuated to Juba, but our local colleagues will stay on in the hopes of helping people by distributing food until the last minute.

An ICRC helicopter lands in front of the compound to pick up patients who cannot walk from the nearby Doctors Without Borders hospital. Those patients cannot flee with the rest of the more than 100,000 residents who live in and around Leer who will, shortly, be displaced to the bush once again.

Most will walk for hours to sleep in swampy grasslands where they feel safe. They will sleep on the ground with little or no shelter. Many will survive on water lilies and coconuts - a repetition of the consequences of the violence that has plagued this area in recent times.

The fast-action evacuation last month was my third day in South Sudan and an unusually challenging start to my assignment in Leer, where I am in charge of ICRC operations across Unity State.

ICRC teams carry out such activities as food distributions for around 120,000 people, surgical support to the local hospital, and training to remind fighters of their obligation not to target civilians during warfare. Once our teams are forced to flee, these activities will stop, hunger will return and the wounded and sick will go untreated.

Back in Juba, we are able to keep in touch with John, one of our most experienced South Sudanese staff members. We left a satellite phone with him and he soon became our main link to Leer and the people moving from there. When fighting got too close to our base, he first moved with his family to his village where he waited to see what will happen. When he no longer felt safe there, he moved to the swamps, keeping low in the grass until he reached a small dry land where hundreds of others had gathered for protection.

After two weeks the fighting died down, at least temporarily, and we returned to Leer late last month to survey the scene. I was anxious about what we would find. Were all our colleagues safe? What would the town look like now? How soon would we be able to become operational again?

Thankfully, some of the staff returned for our arrival and had news of the others. Despite what they had been through, they were eager to restart work. I'm amazed, but these are their people after all - their relatives, neighbours and friends. They want to help. The town was eerily empty and a handful of houses had been burned to the ground, but overall the damage was not as bad as we had feared.

However, the deflated tyres had not done the trick. Four of our six vehicles had been taken. Our base had been looted. The remainder of the food had been taken, though it probably went to the people we would have given it to anyway. The loss of the basic infrastructure and vehicles however means a delay until we can resume operations, assuming things stay calm.

In the meantime, people still needed help. Our staff and others told us of wounded fighters and civilians, of dead who remained unburied, and the loss of food and shelter for the many who left everything behind. So, three days later, we returned to Leer again, this time with supplies: tarpaulins, jerry cans, fishing kits, and a little food for some 6,000 people.

Along the airstrip, we distributed a temporary lifeline to as many as our supplies could stretch to. In the blazing sun, several wounded residents lay on stretchers in the shadow of our plane's wings, as they waited to be taken for surgery elsewhere.

Even amid the suffering and loss, people showed resilience, determination and even hope, collecting the leftover cardboard boxes, plastic straps and bags that the distribution items came in: construction, or rather, reconstruction materials.

I asked one woman waiting her turn in line what she would do now, after the latest violence in a region that has seen decades of fighting. The reply was simple: "What we've always done. Go back to the village and start again." 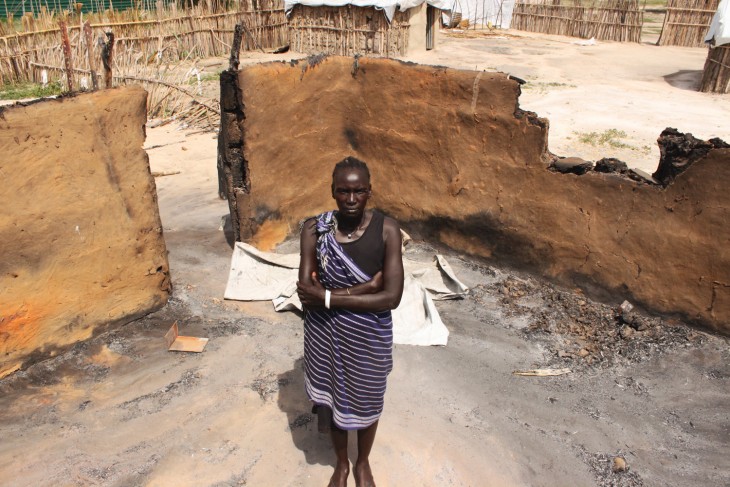 Mary stands inside the remnants of her burned home in Leer at the end of May 2015. CC BY-NC-ND/ICRC/Jason Straziuso

The views expressed in this article are the author's own and do not necessarily reflect Al Jazeera's editorial policy.