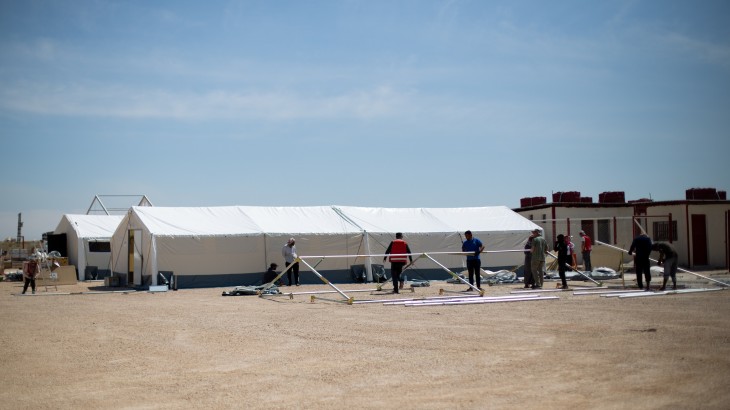 Damascus, Syria: A new field hospital to assist patients wounded in war or suffering from illness will open this week in Al Hol camp to address the massive humanitarian needs after an influx of people in recent months.

The hospital is opening with support from the Syrian Arab Red Crescent (SARC), the International Committee of the Red Cross (ICRC) and the Norwegian Red Cross.

The more than 63,000 people who have arrived in Al Hol since December had been without access to health care in their areas due to ongoing hostilities, lack of medicine, and damaged or destroyed health facilities. Philip Spoerri, head of the ICRC’s delegation in Syria, described the need for medical assistance in Al Hol as 'tremendous' after a recent visit there.

“The camp expanded very rapidly, and this has made it challenging for humanitarians to keep up with the demand, particularly for medical services. Many people were injured during the hostilities or on the road to the camp, and months later now they have still not been treated,” Spoerri said.

After the arrivals, the population of Al Hol stands at 74,000 people, of which 90 per cent are women and children.

"We are trying to meet the increasing humanitarian needs, not only towards the families residing in Al Hol Camp, but also the distressed people who have been affected by floods in Rural Hassakeh, where Syrian Arab Red Crescent volunteers have been working around the clock over the last few months," said Khaled Hboubati, president of SARC. "The deterioration of the health situation in the Camp rang a bell to the need of this medical facility, which is the first of its kind, designed to provide a higher level of health care services, among it high efficient surgeries. The field hospital is considered one of the most advanced facilities used in disaster response. We wouldn't have gotten this far without the support of our humanitarian partners and the concerned parties responsible for facilitating the approvals and delivery of this hospital to Hassakeh."

In the initial phase, the 30-bed hospital will include an emergency room, operating theater, post-operative care and a laboratory. The first rotation of medical staff comprises people from Red Cross Societies in Norway, Iceland, Denmark and Finland.

"The Norwegian Red Cross has many years of experience deploying surgical field hospitals, and our teams can set up a field facility and begin treating patients within a few days, when all the equipment are in place," said Bernt G. Apeland, secretary general of the Norwegian Red Cross. "We are proud to work together with the SARC and the ICRC to provide life-saving surgical assistance to the people in Al Hol."

Activities of the ICRC in north-east Syria

Since December 2018, military operations have led to a huge influx of civilians in camps in the north-east Syria. Up to 100 thousand people reside in the camps. The population of the Al Hol Camp has reached 74,000 people, an estimated two-thirds are children. The ICRC and SARC have scaled up the response in the camps (food, including a collective kitchen, tents, water trucking and bottled water for newcomers, waste disposal, deployment of several SARC mobile health units and restoring family links for Syrians and foreigners).

Click here for footage and videos from the hospital and the camp.