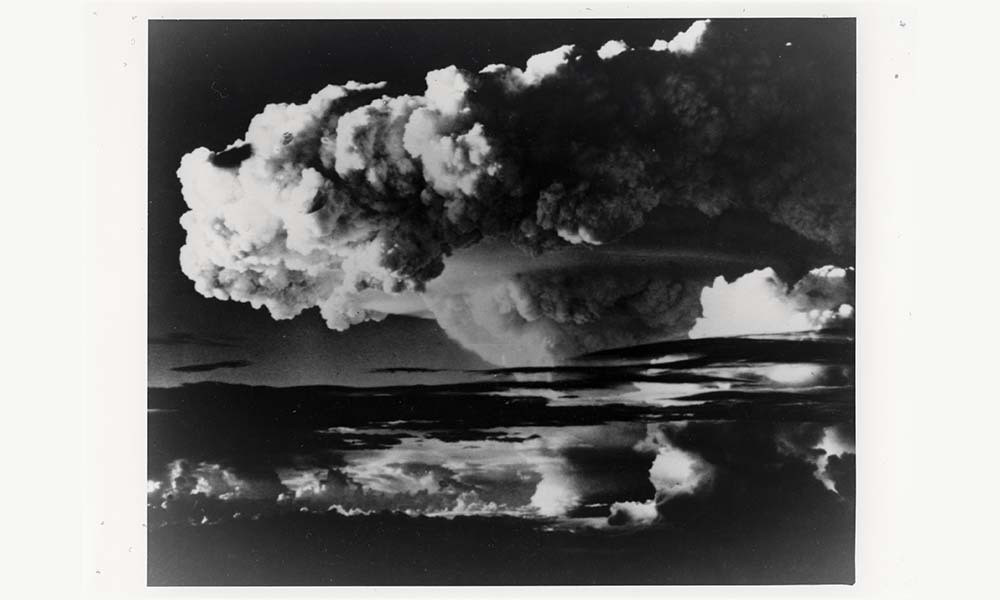 Snow isn’t something we picture when we think of Pacific Island countries, with their stretches of crystal-clear water, warm sand and palm trees. But as ash fell from the sky onto the Marshall Islands in 1954, it floated down like snow.
Article 26 September 2021 Australia

This snow didn't melt away as it reached the sand and sea – it contaminated people, animals, water, food and land. It had come from the testing of a nuclear weapon.

This scene was not a singular event for the region. For over 12 years nuclear testing was carried out in the Marshall Islands. This testing, also carried out in other Pacific nations, left lasting damage, felt by generations of families.

"The experience is still felt to this day by every Marshallese person both here and afar, it's become our lasting memory. Our Elders still weave tales of the harrowing scene of bright lights and irradiated snow falling on an island where snow doesn't exist." says Roger Muller from the Marshall Islands Red Cross Society.

This is the reality of nuclear weapons, and nuclear testing.

Today is the International Day for the Total Elimination of Nuclear Weapons. A day to remind ourselves why it's important to work towards a world free from nuclear weapons. That work takes many forms, and one way is through the law.

In January of this year we celebrated an important milestone as the Treaty on the Prohibition of Nuclear Weapons (TPNW) became international law. In a year where we face an ongoing pandemic, climate risks and multiple humanitarian crises, we now have a global norm that explicitly bans nuclear weapons.

Japanese Red Cross and ICRC doctors, nurses and workers witnessed the destruction and suffering caused by the atomic bombs in Hiroshima and Nagasaki. Today, Japanese Red Cross hospitals continue to treat thousands of patients with cancer caused by radiation exposure – an enduring reminder of the devastation nuclear weapons can cause and why we must prohibit them.

There are currently thousands of nuclear weapons in the world that are ready to be used in an instant. If this happened, devastation of an unimaginable proportion would be unleashed in seconds. As Muller puts it, "Weapons of mass destruction affect lives and the land. It takes away the very earth you live on, it changes the air, the river, the sea, and the sky."

The Asia-Pacific region has been touched by the catastrophic realities of nuclear weapons more than others. Countries in our corner of the world remember the horrific, indiscriminate impact of nuclear bombs, and still struggle with the impact of their testing. As observed by Member States of the Pacific Islands Forum, "[t]he use and testing of nuclear weapons is one of the most serious threats to the community of nations and future generations."

Knowing the dangerous realities of nuclear weapons, many Pacific Island States have consistently advocated for, and supported, pathways to their elimination. This includes the Pacific Small Islands Developing States (PSIDS) – an initiative comprised of 14 Pacific Island countries. Indeed, some of the strongest laws on nuclear and other weapons are found in the Pacific. Palau was the first country to ban nuclear weapons in its Constitution in 1979. In 1986, the South Pacific was the second region in the world to establish a nuclear free zone, with the Rarotonga Treaty.

It is little wonder that Pacific Island States were also among the strongest supporters of the TPNW throughout its negotiation, adoption and ratification. To date, 10 Pacific nations have become States Parties to the TPNW. These countries commit not to develop, test, produce, acquire, possess, stockpile, use or threaten to use nuclear weapons – nor to help any other country to do the same.

Importantly, they also commit to addressing environmental contamination and helping victims of nuclear testing and use.

With all that's going on in the world, it's easy for us to resign nuclear weapons to a historic tragedy or a Cold War fear. Yet the risks of future use remain, and the effects of nuclear weapons and their testing are still being felt - a poignant reminder of the humanitarian disaster the use of nuclear weapons would create. We must continue to harness the tools we have available to work for a world free of these inhumane weapons.

A future free from nuclear weapons is not only possible, it is crucial – for the families of those who saw ash floating down like snow over the sea, for those who still feel the effects of the bombs dropped on Hiroshima and Nagasaki, and for all of us who do not wish to see another horrific event come to pass. As a PSIDS statement encapsulates, "we owe it to ourselves and our future generations."

By Clementine Rendle, Regional Legal Advisor at the International Committee of the Red Cross