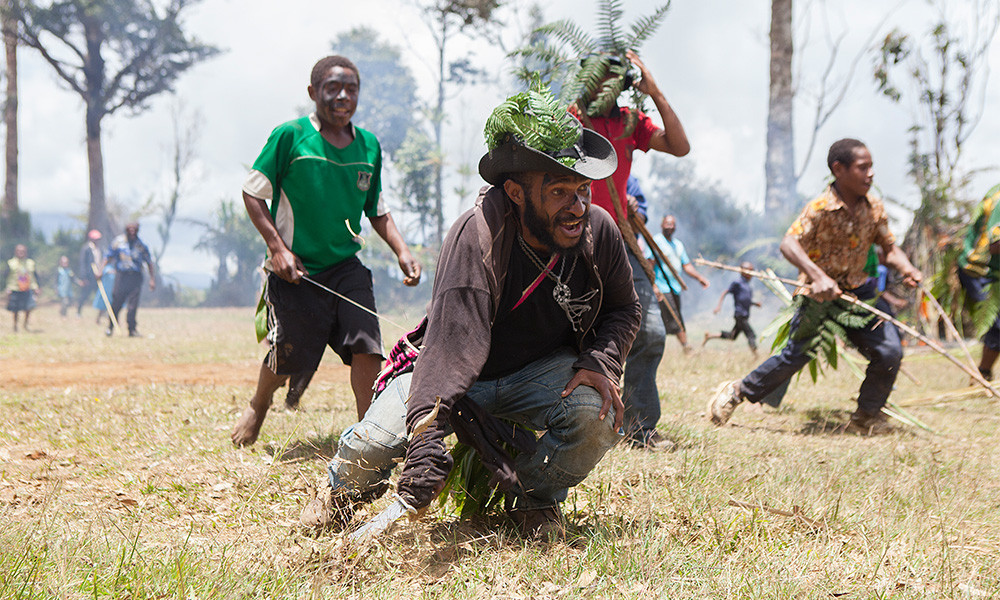 Tribal fighting remains ubiquitous in the Highland communities of PNG. As the pattern of violence worsens, the role of groups like the ICRC only becomes more essential.
Article 15 March 2022 Australia Papua New Guinea

This is the usual response I get when I tell people about the work the International Committee of the Red Cross (ICRC) undertakes in PNG alongside the PNG Red Cross. While only four kilometres in the Torres Strait/Zenadth Kes separate Australia and PNG, an understanding of the struggles faced by our next-door neighbours is distant for most Australians.

Since 2012, the ICRC has responded to tribal violence in PNG's Enga, Hela and Southern Highlands provinces. In 2021, approximately 30,000 people were displaced by communal violence in the areas in which the ICRC operates. While this number is tiny in comparison to other places where the ICRC operates like Syria and Yemen, these fights have considerable effects on Highland communities.

Tribal fights are brutal. The aim is simple – to destroy the enemy, mentally and physically. Fights generally take place in or around remote villages without access to medical assistance or law enforcement. By taking over the enemy's land, the occupying party is better positioned during future peace and compensation negotiations. Unfortunately, the civilians who do not participate in the fights are the ones who bear the brunt of the violence. Many are wounded or killed during these intense battles. The Highlands' limited access to healthcare only adds to the anguish. Regrettably, at times sexual violence occurs during these fights. On top of immediate needs, the impact of violence remains even after the fighting has stopped — fleeing villagers are often displaced for months or even years.

The changing nature of tribal violence

While tribal fighting is not new to PNG or the Highlands, several factors have made the situation worse in the last 20 years.

For one, more than 50 percent of the nation's population is under the age of 24. In the ICRC's experience, the Highlands have an even higher proportion of youth. Few opportunities and limited employment in the region push many youths towards violence. Further, as PNG modernises, traditional cultural and tribal structures are rapidly changing. With more outside communications, traditional elders and leaders are losing their stabilising influence. Finally, the introduction of modern weapons and methods of warfare have led to more brutal outcomes.

In the Highlands, clans take up arms against each other to defend their pride and interests. The clan's decision to escalate in response to a grievance is one made out of kinship and solidarity. The cause of a fight ranges from complex electoral outcomes or generational land disputes, to the simple souring of relationships, or a misunderstanding after an altercation.

Fights in the Highlands are unpredictable. Battles are short and intense but reaching a ceasefire or peace agreement can take months or years — many fights remain "frozen" with no active fighting for long stretches. Without a peace agreement in place the fight may resume at any moment. For this reason, the ICRC and the PNG Red Cross build and maintain connections with local Highland communities, enabling us to undertake neutral humanitarian action when needed.

Just like the Geneva Conventions, Highland communities have their own rules about what is permitted during a fight. The most consistent rule is the concept of neutrality — participants should not attack neutral people, places, buildings, or objects.

From a traditional perspective, there is broad agreement that killing 'innocent' people would lead to death or defeat in battle, either by incurring a generation of bad luck or becoming a target of the deceased's spirit. Unfortunately, like in many situations of violence, in the heat of the fight these tacit rules are not always strictly followed, and communities have limited means of enforcing them.

A rule of similar importance is the principle that fighting can only take place on the lands of the clans involved in the fight. The ICRC has observed neutral clans marking their boundaries to prevent becoming involved. Rules and traditions of tribal fighting are primarily passed from father to son, or at clan meetings. However, many older community members feel that younger generations no longer respect these teachings.

Women are generally excluded from the tribe's combat decisions. While this is not always the case, they are often expected to take small children and key possessions to the safety of relatives, or to hide until the fight is over.

Addressing the direct humanitarian consequences of tribal fights is complex. The ICRC's response is adapted to each stage of the fight. In the "emergency" phase when a fight is active or just occurred, we focus on addressing the pressing needs of communities such as supporting health facilities to receive the wounded. We help victims/survivors of sexual violence access support services in the region, including for physical, mental, and emotional support. The simple act of paying for transport to access these services in a larger town, or negotiating passage through a roadblock controlled by enemies, significantly eases the suffering experienced by the victim/survivor.

Once a fight has concluded, we work directly with communities, supporting them to get back on their feet through microeconomic initiatives that develop livelihoods and agricultural projects. We support community-led reconstruction projects by providing building materials and bringing together warring parties, enabling them to rebuild damaged community infrastructure such as schools and health centres. The ICRC also uses community drama shows and radio broadcasts to deliver messages to help Highlanders understand the consequences of fighting.

The ICRC also supports medical facilities throughout the Highlands to ensure that when fights occur medical assistance is available. We provide training and mentoring to healthcare workers on how to respond to violence-related medical needs and engage with local community health committees to advocate for better access to facilities for patients who are affected by a fight. This puts humanitarian principles at the core of assistance activities. We place emphasis on addressing the needs of victims/survivors of sexual violence, ensuring awareness that such patients require unique and appropriate service.

Tribal connections are at the core of PNG's culture. This will never change. Nor will grievances between tribes. As the Highlands modernise, ensuring communities' understand the foundational values that make up their identities will become ever more important. The Red Cross Movement in PNG will continue to play a neutral humanitarian role in the Highlands helping to ensure humanity continues to be at the core of Highland culture and that those affected by this violence are not forgotten.

Written by Andrew Kobylinski, the Policy and Political Affairs Officer at the International Committee of the Red Cross in Canberra.

This article was originally published on Australian Outlook