ICRC delegation to the African Union 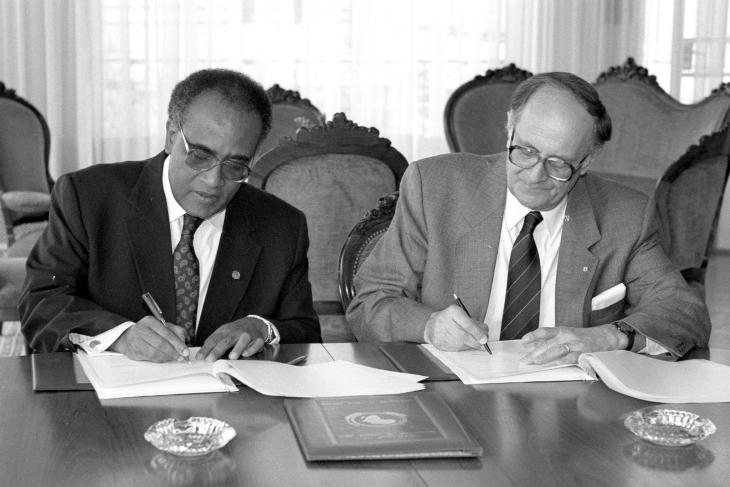 ICRC headquarters, Geneva, May 1992. Salim Ahmed Salim, Secretary General of the Organization of African Unity and Cornelio Summaruga, ICRC president, sign a memorandum of understanding that marks the beginning of a long partnership. CC BY-NC-ND/ICRC/T. Gassman
ICRC and Amani Africa launch Special Research on the 'Review of the Integration and Implementation of International Humanitarian Law in African Union Policies and Activities- News Release, 19-12-2022

ICRC welcomes the ratification of the Kampala Convention by Somalia - Article, 12-03-2020

African Union: ICRC Seminar on the use of Explosive Weapons in Populated Areas - Photo gallery, 15-11-2019

African Union: Seminar on use of explosive weapons in populated areas - Statement, 06-11-2019

EWIPA: ICRC Statement on the use of Explosive Weapons in Populated Areas - Statement, 22-10-2019

African Union: ICRC calls on all parties to conflict to respect IHL in urban warfare - Statement, 04-12-2018

AU–ICRC Roundtable on Operationalization of the obligation to ensure respect for IHL - news release, 01-06-2018

The ICRC pays courtesy visit to the AU Commissioner for Political Affairs - article, 22-03-2018

African Union: Launch of the Swahili version of the Luanda Guidelines - article, 26-04-2017

AU and ICRC call on states to respect the Anti-Personnel Mine Ban Convention, the Convention on Cluster Munitions and other relevant treaties - article, 07-04-2017

Joint statement of the ICRC and the African Union on the occasion of the International Day for Mine Awareness - news release, 05-04-2017

African Union: Joint seminar with ICRC on protecting civilians amid war and other violence - 11-11-2011